Anime fans have been waiting for a long time to see anime-inspired skateboarding. The sport of skateboarding looks so much cooler in an anime setting and Sk8 the infinity showed us what could be done in this genre.

Many fans after completing the show were left wanting more, as there is no sk8 season 2 out yet, these fans can watch some other great sports anime that has the same level of intensity and story compared to SK8 the infinity. 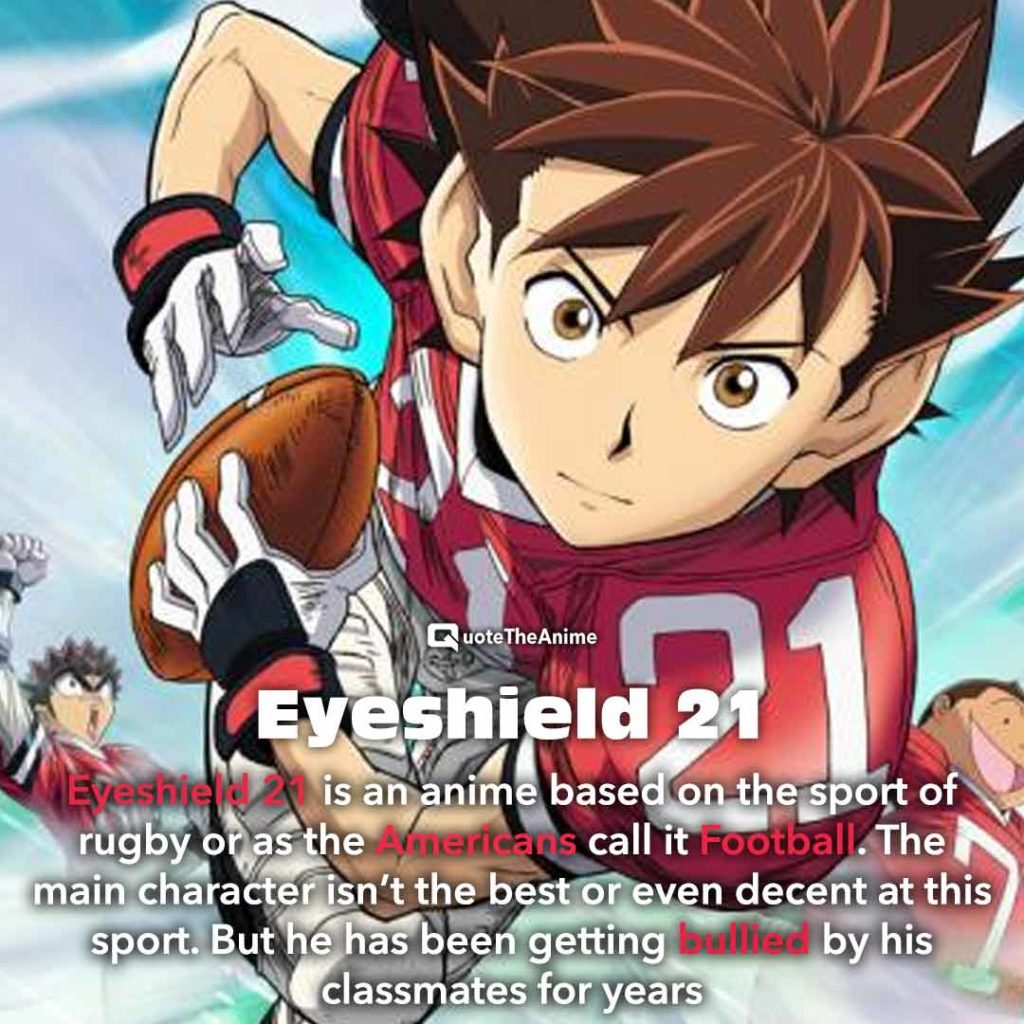 Eyeshield 21 is an anime based on the sport of rugby or as the Americans call it Football. The main character isn’t the best or even decent at this sport. But he has been getting bullied by his classmates for years now and due to this, he has managed to become one of the fastest players on his team.

It is an inspiring story about perseverance and never giving up, which makes the anime earn its position on the list.

9. The Prince of Tennis 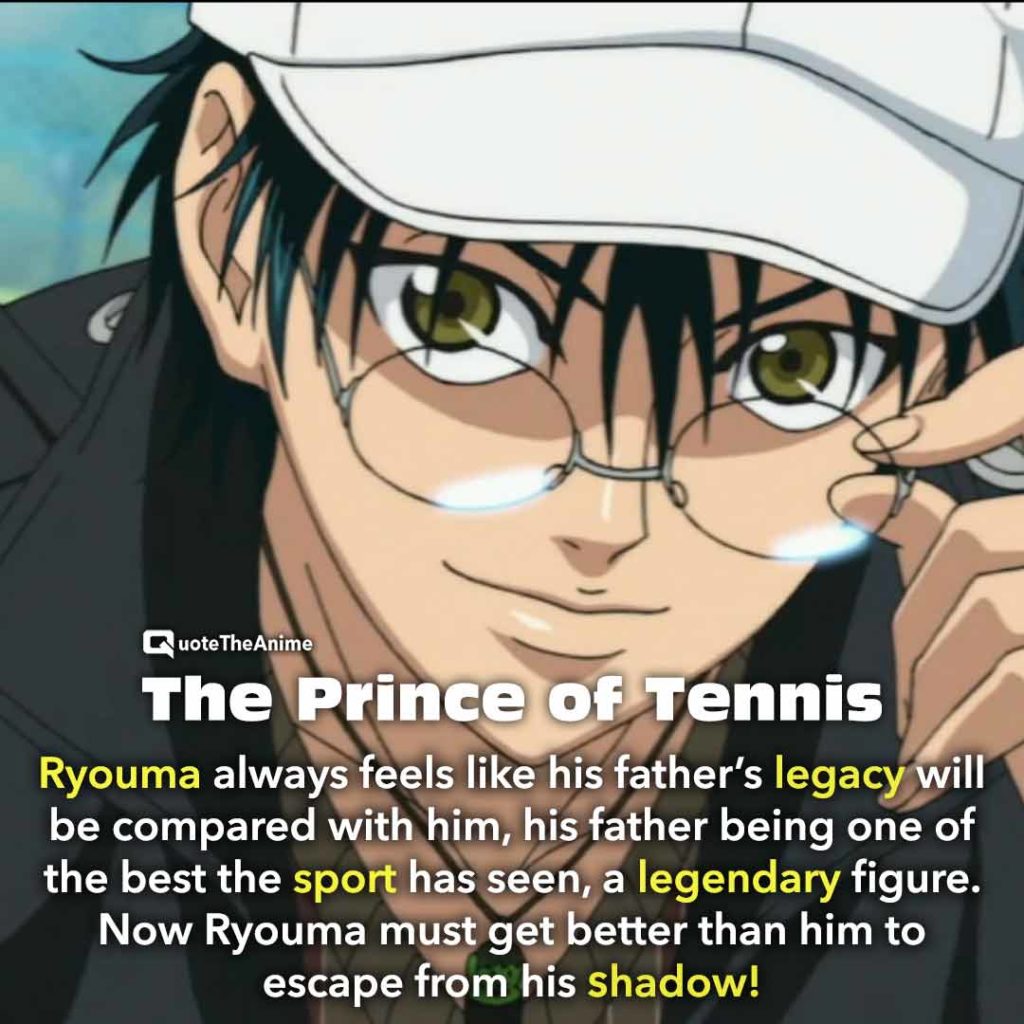 Ryouma always feels like his father’s legacy will be compared with him, his father being one of the best the sport has seen, a legendary figure.

Now Ryouma must get better than him to escape from his shadow, but it is not easy. On his journey to becoming the greatest, even greater than his dad Ryouma has to train hard, harder than others to win. The anime has several arcs showcasing Ryouma’s talent and different strategies that he uses to compete with top players. 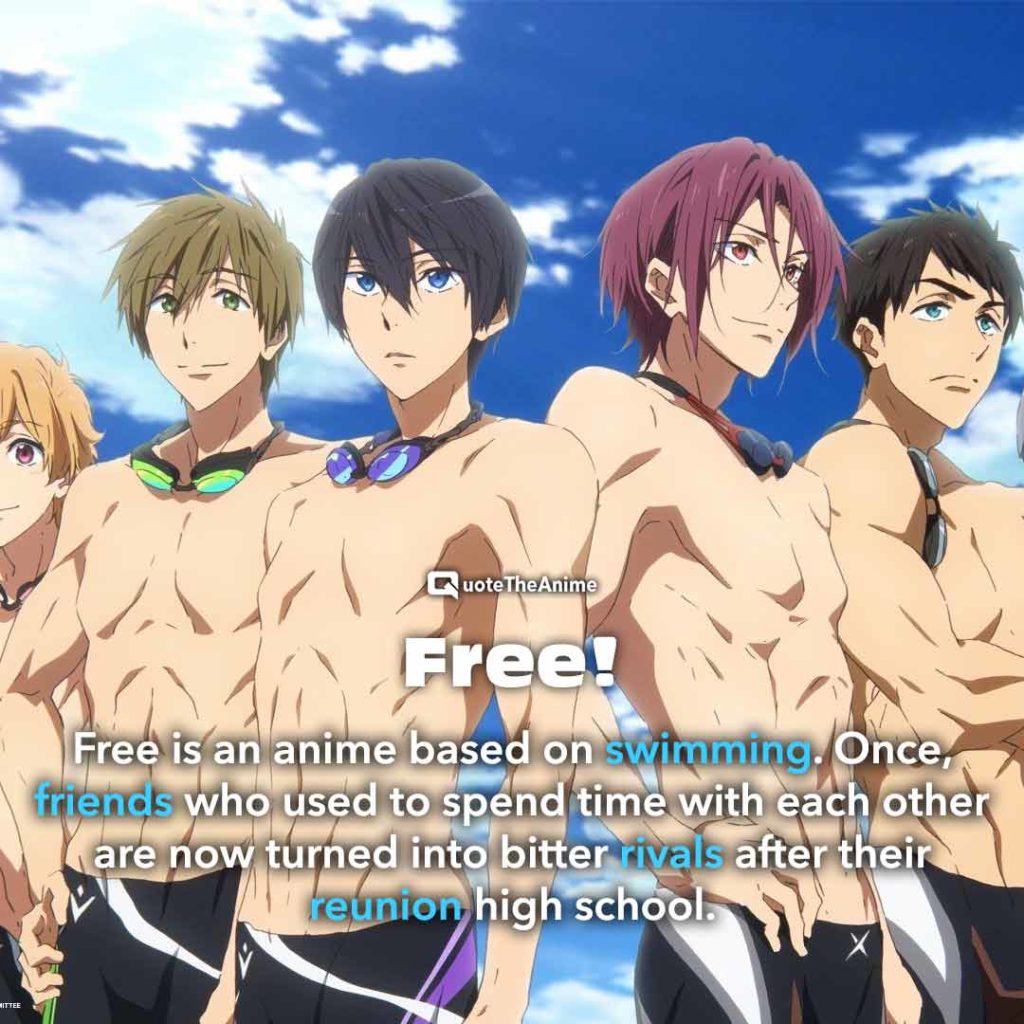 As the summer heat starts falling open our heads, we can’t stop ourselves from jumping into the pool and getting a refreshing feeling. But as the pandemic is still on-going in many parts of the world, this might not be wise. But fear not, Free is an anime based on swimming.

Once friends who used to spend time with each other are now turned into bitter rivals after their reunion high school. The swimming sport has made them more strong and resilient than before. The friends take part in a competition to settle scores and win big. The anime is a mix of sports and slice-of-life, it is a fresh anime with great characters and story. 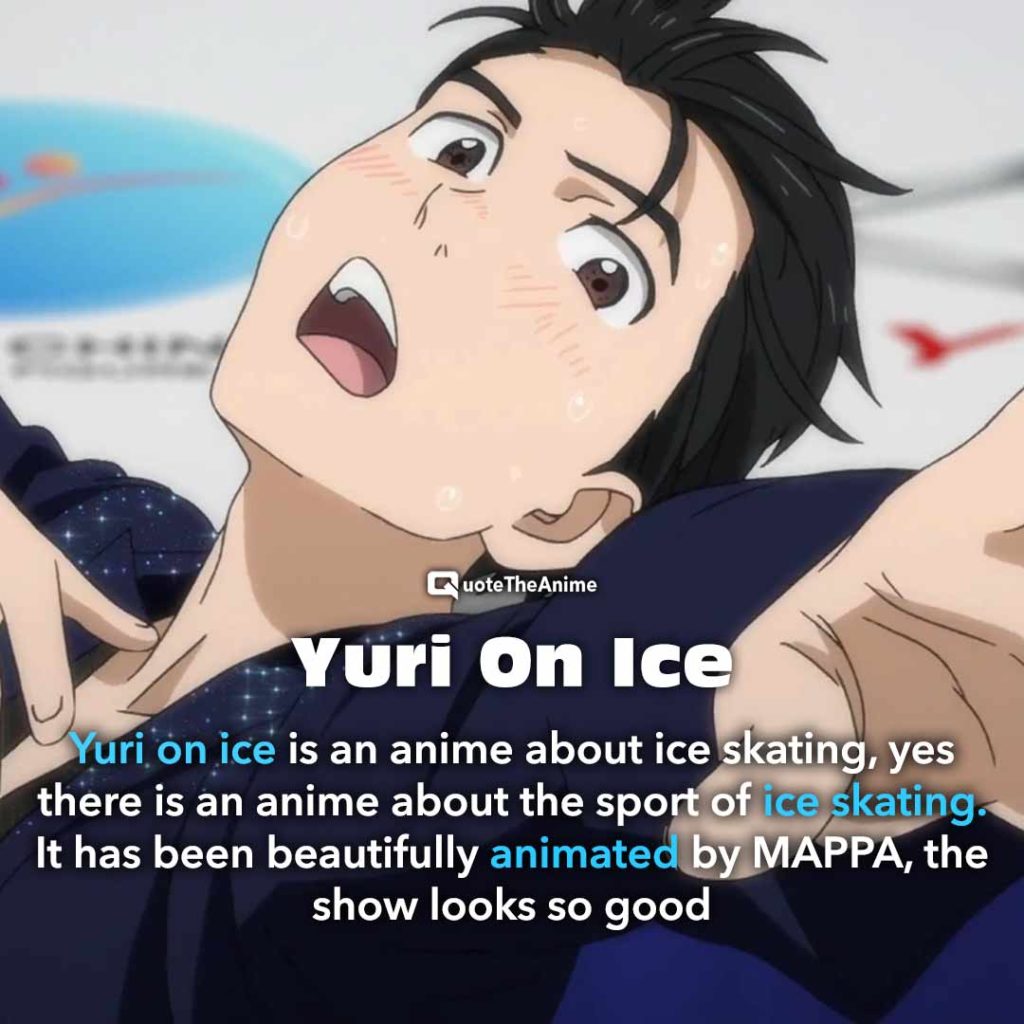 It has been beautifully animated by MAPPA, the show looks so good actually that you forget that these are hand-drawn characters. The story follows Yuri who has lost all his motivation after losing, but he still was a great prodigy, so Victor, a famous ice-skater, decides to take Yuri under his wing and make him great again. It is a story of great struggles that Yuri faces whilst trying to win. 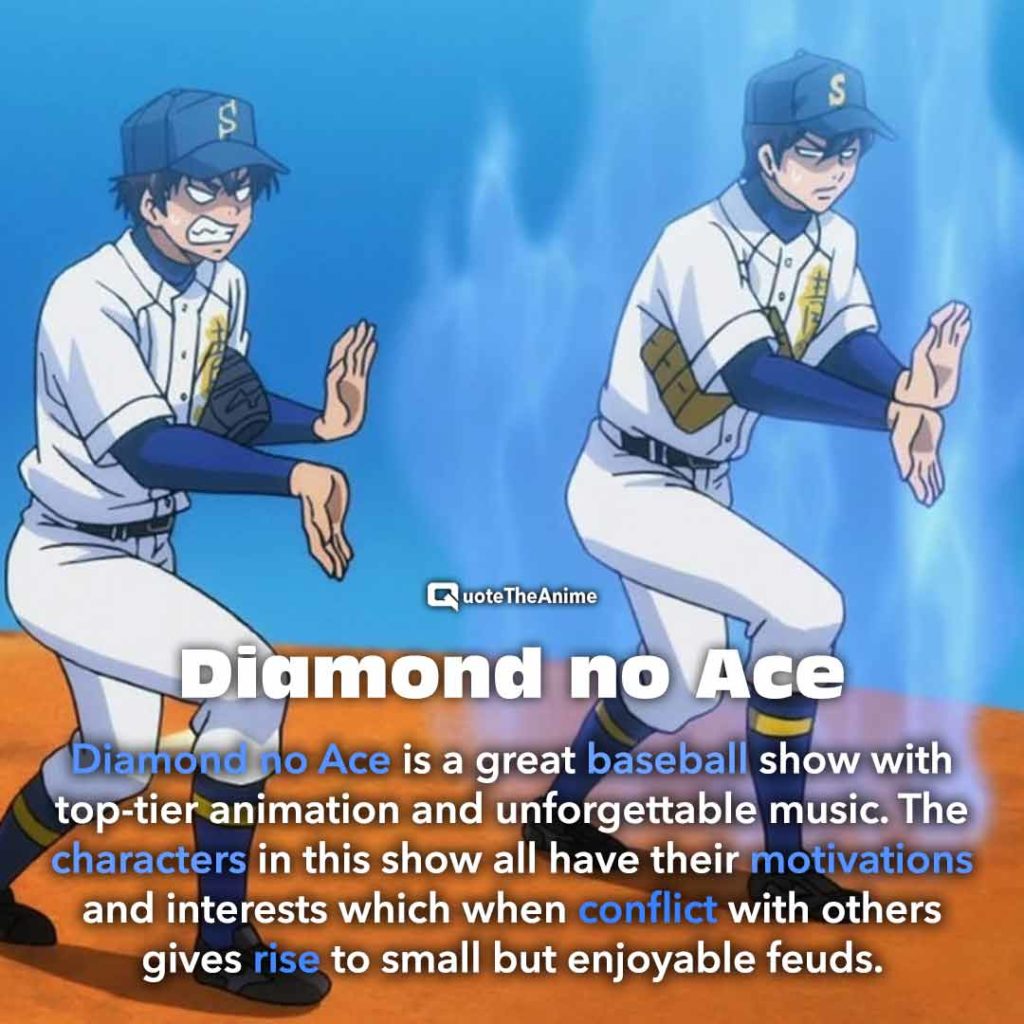 This one’s for all the baseball fans out there, Diamond no Ace is a great baseball show with top-tier animation and unforgettable music. The characters in this show all have their motivations and interests which when conflict with others gives rise to small but enjoyable feuds and competitions.

Our main character is trying to be the best in his team, the ACE as the title suggests. But on his way towards greatness, there will be hurdles which he will have to overcome to hit that winning home run and run towards victory! 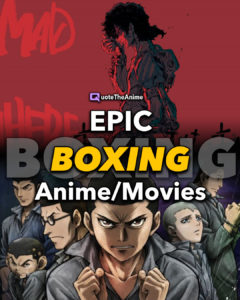 12+ Epic BOXING Anime/Movies Of All Time (RANKED) Memorable fighting scenes, camaraderie, an unstoppable will, and determination. That’s what all boxing anime are about. They

5. Run with the wind 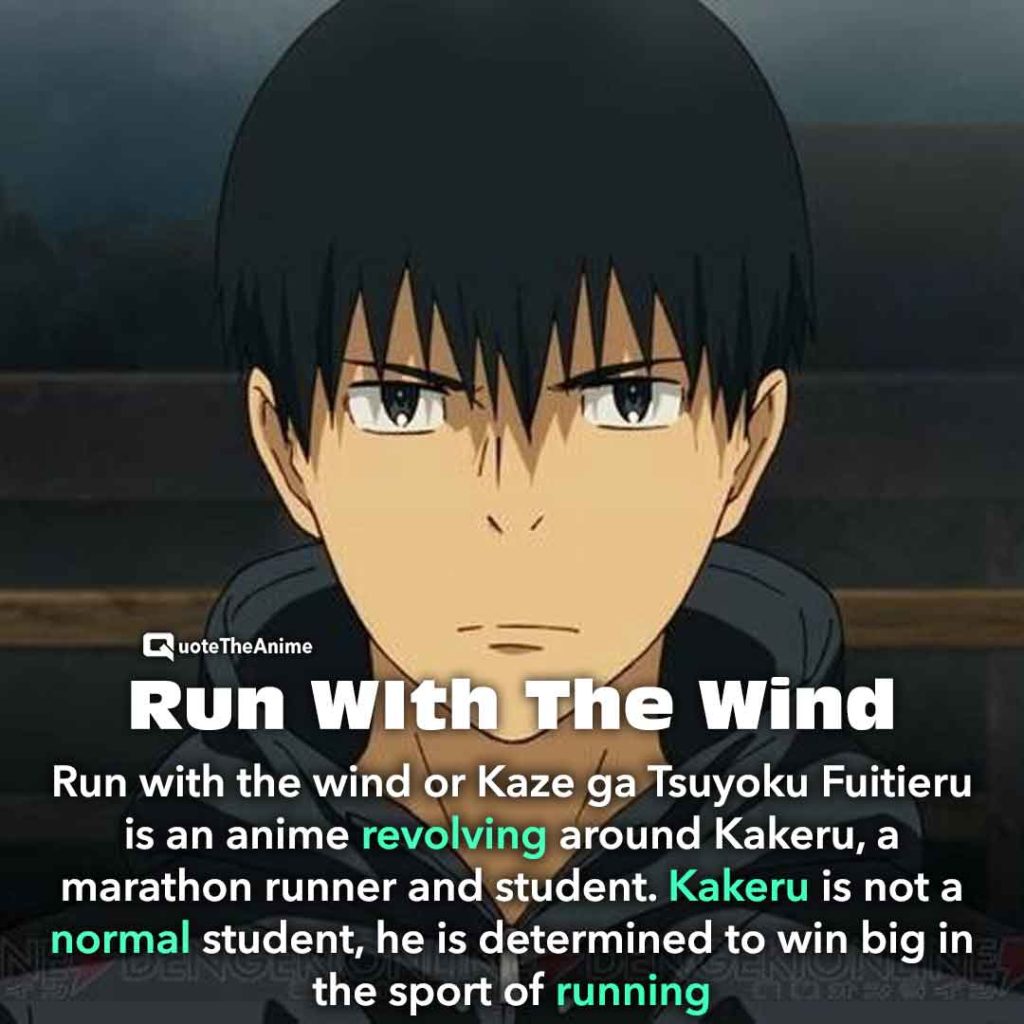 Run with the wind or Kaze ga Tsuyoku Fuitieru is an anime revolving around Kakeru, a marathon runner and student. Kakeru is not a normal student, he is determined to win big in the sport of running, even if he falls he’ll get up, even if he stumbles he’ll get up, that’s the motto by which he lives.

But life goes downhill when he manages to lose money in a game of Mojang, he loses his apartment due to not being able to pay his rent. Seeing the agility and determination of Kakeru; Haiji offers him to stay at his house with the other 8 students. The story follows the struggles of Kakeru whilst he tries to become a champion. It’s truly an inspiring anime that everyone should watch. 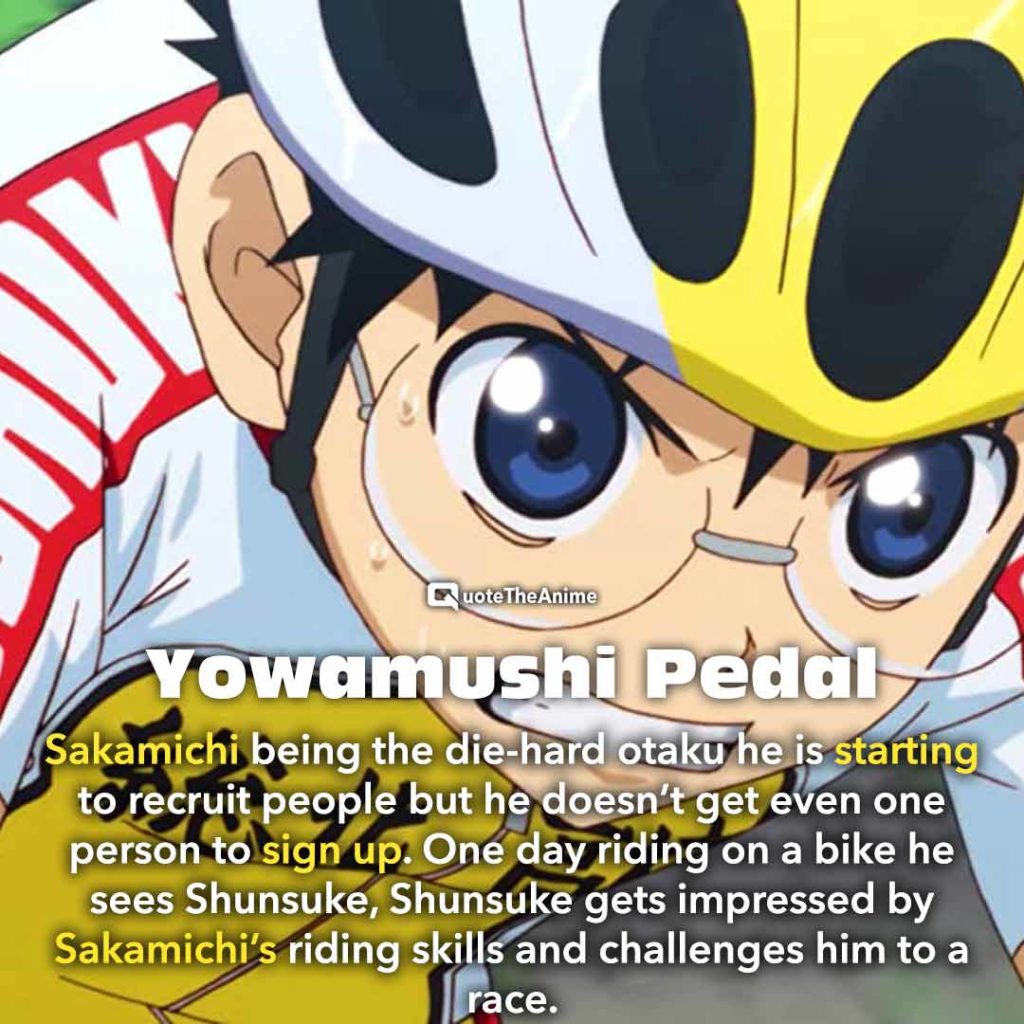 Now, this is an anime that every weeb can relate to. The protagonist of the story is Sakamichi, who is a die-hard otaku and loves nothing more than collecting anime merch and watching anime for hours! Sakamichi tries joining the otaku club in his high school but just before he could join it, the club gets closed.

So Sakamichi being the die-hard otaku he is starting to recruit people but he doesn’t get even one person to sign up. One day riding on a bike he sees Shunsuke, Shunsuke gets impressed by Sakamichi’s riding skills and challenges him to a race. Sakamichi agrees on one condition, if he wins, Shunsuke will join the anime club. From there the story sees Sakamichi become a world-class cyclist. 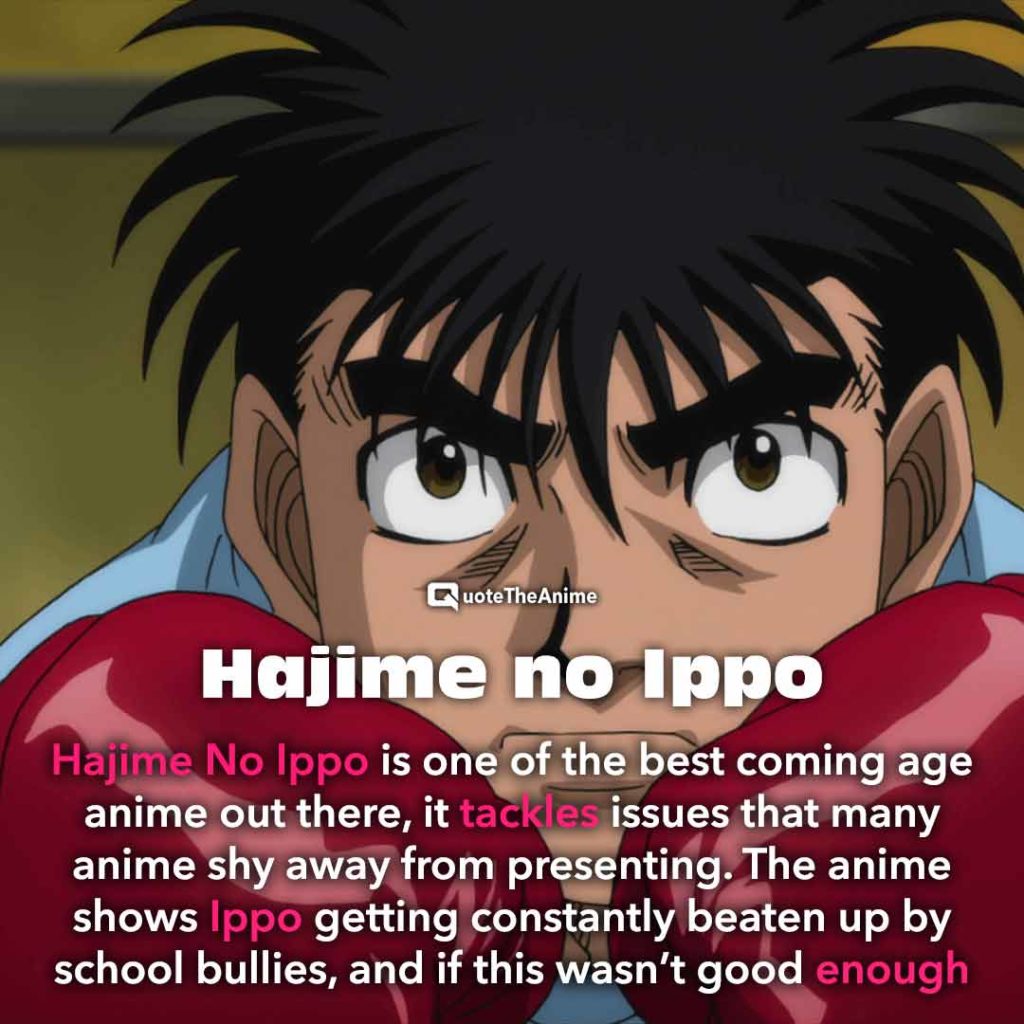 Fighting spirit is one of the best coming age anime out there, it tackles issues that many anime shy away from presenting. The anime shows Ippo getting constantly beaten up by school bullies, and if this wasn’t good enough for the bullies, they even make him do their chores.

One day Ippo gets saved by a popular boxer and Ippo, impressed by him, asks him to teach him the art of fighting. But the boxer doesn’t think too highly of Ippo and gives him a weekly task which if he completes, he’ll train him. Ippo goes against all the odds to complete this task and from three it only gets better. This is a must-watch show regardless of your taste in anime 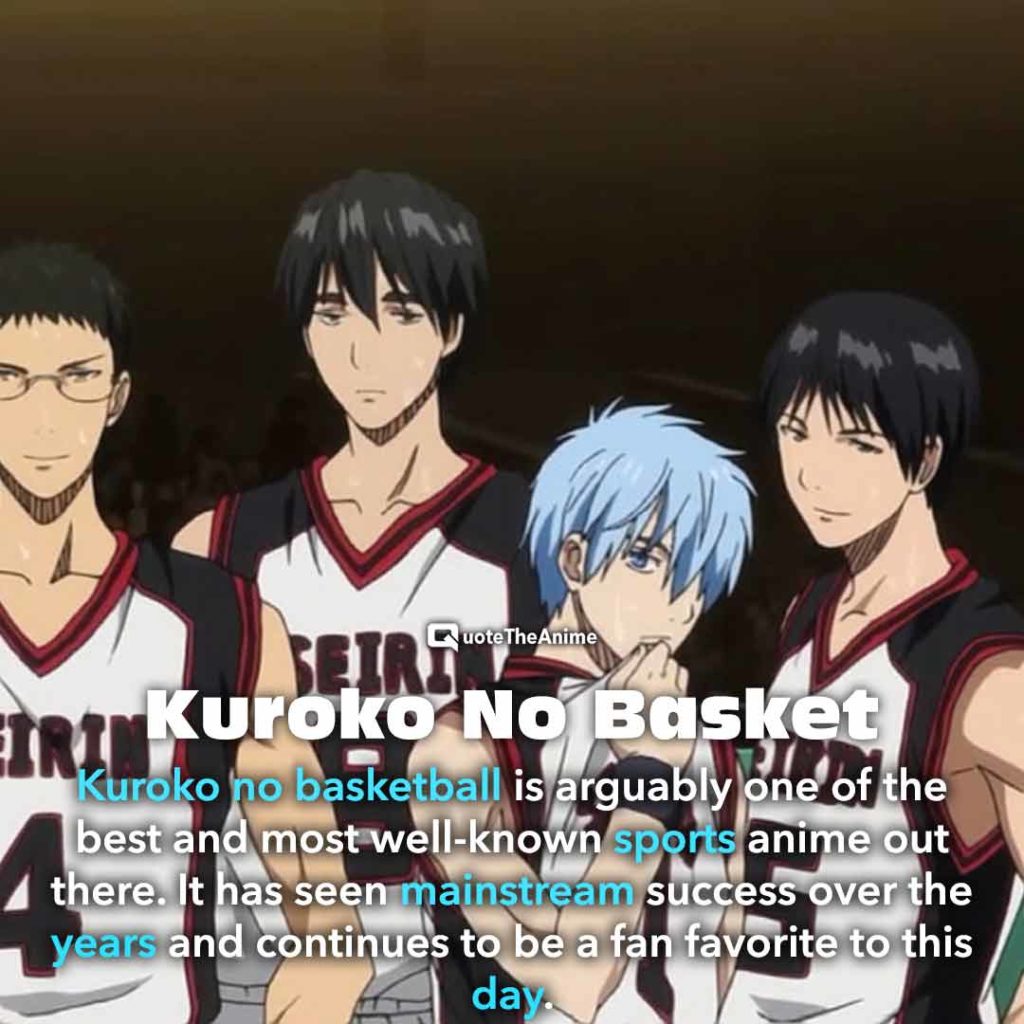 Kuroko no basketball is arguably one of the best and most well-known sports anime out there. It has seen mainstream success over the years and continues to be a fan favorite to this day. It managed to capture the eyes of many basketball enthusiasts around the globe to become one of the best basketball shoes.

In the years since its inception, it has garnered a strong fanbase. What made the show great wasn’t the overpowered main character but the case is the opposite in this one. Tetsuya can’t even score a basket let alone a three-pointer. But where lacks in shooting he manages to compensate with his extraordinary vision. It is a must-watch anime for all the basketball fans out there. 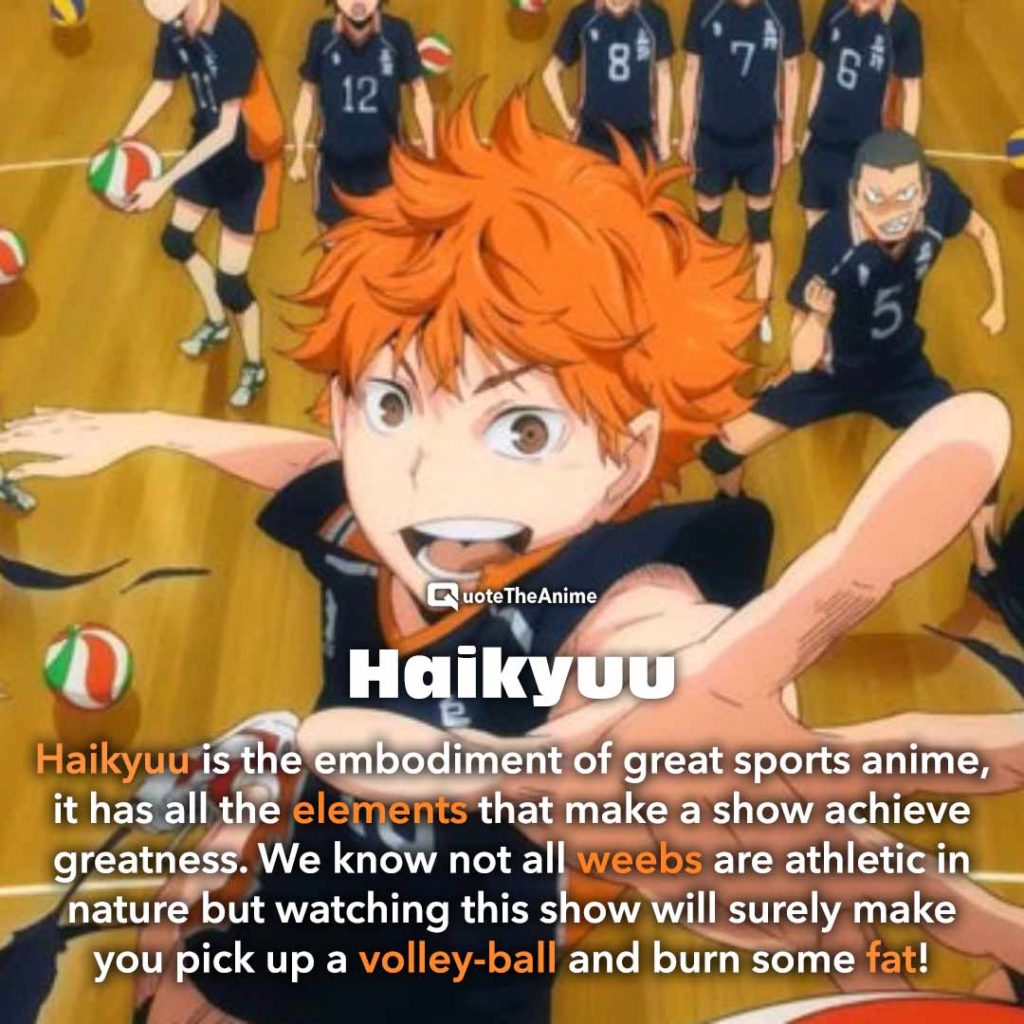 Haikyuu is the embodiment of great sports anime, it has all the elements that make a show achieve greatness. We know not all weebs are athletic in nature but watching this show will surely make you pick up a volley-ball and burn some fat! The show follows the journey of Hinata who is in love with volley-ball.

One day after tasting defeat from the hands of his arch-rival Kageyama, he starts training even harder to defeat him. But destiny had something different planned for Hinata, both Kageyama and Hinata join the same high school and are forced to play in the same team. The show has over 3 seasons and 2 movies so there is a lot of content for you to watch.

Once again, Sk8 The Infinity is one of the most pleasing looking Anime we got to see in 2021 so far. Maybe this year ain’t that bad, is it? Well, watch these crazy action Anime and have a great day full of moments where the protagonists will surpass their limits. Until next time, PEACE!

12+ Epic BOXING Anime/Movies Of All Time (RANKED) Memorable fighting scenes, camaraderie, an unstoppable will, and determination. That’s what all boxing anime are about. They 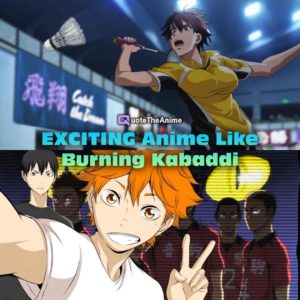 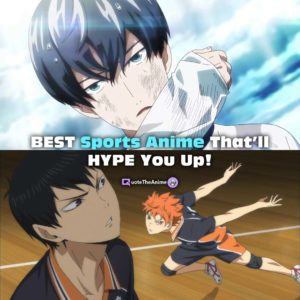 Sports anime has always been extremely popular amongst anime fans because of the way it’s glorified and made intense. All genres of anime are addictive 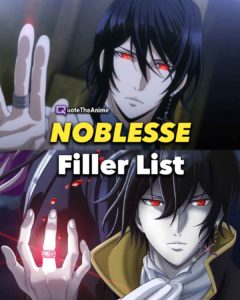 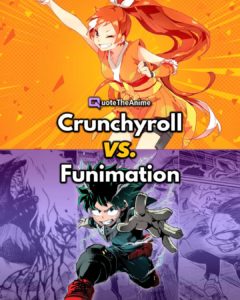 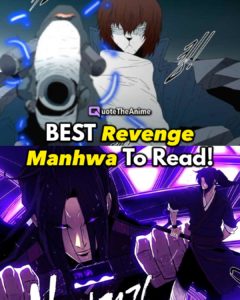