The main protagonist of the series, Itadori Yuji is a first-year student at Tokyo Metropolitan Curse Technical College. The muscular teenager with pink hair and brown eyes is always full of energy. Itadori is known for his excellent speed and strength throughout his school.

After becoming the host to King Of All Curses called “Sakuna,” Itadori got a line under both of his eyes. Throughout the series, Itadori is shown to be the most empathetic person, constantly trying to help his comrades, and helping the ones in need.

Itadori knows the value of life, and how it is possible to protect everyone with enough effort invested. If an enemy is unjustly hurting others, Itadori won’t sit quietly. He’s known to be pretty rowdy when it comes to fighting. 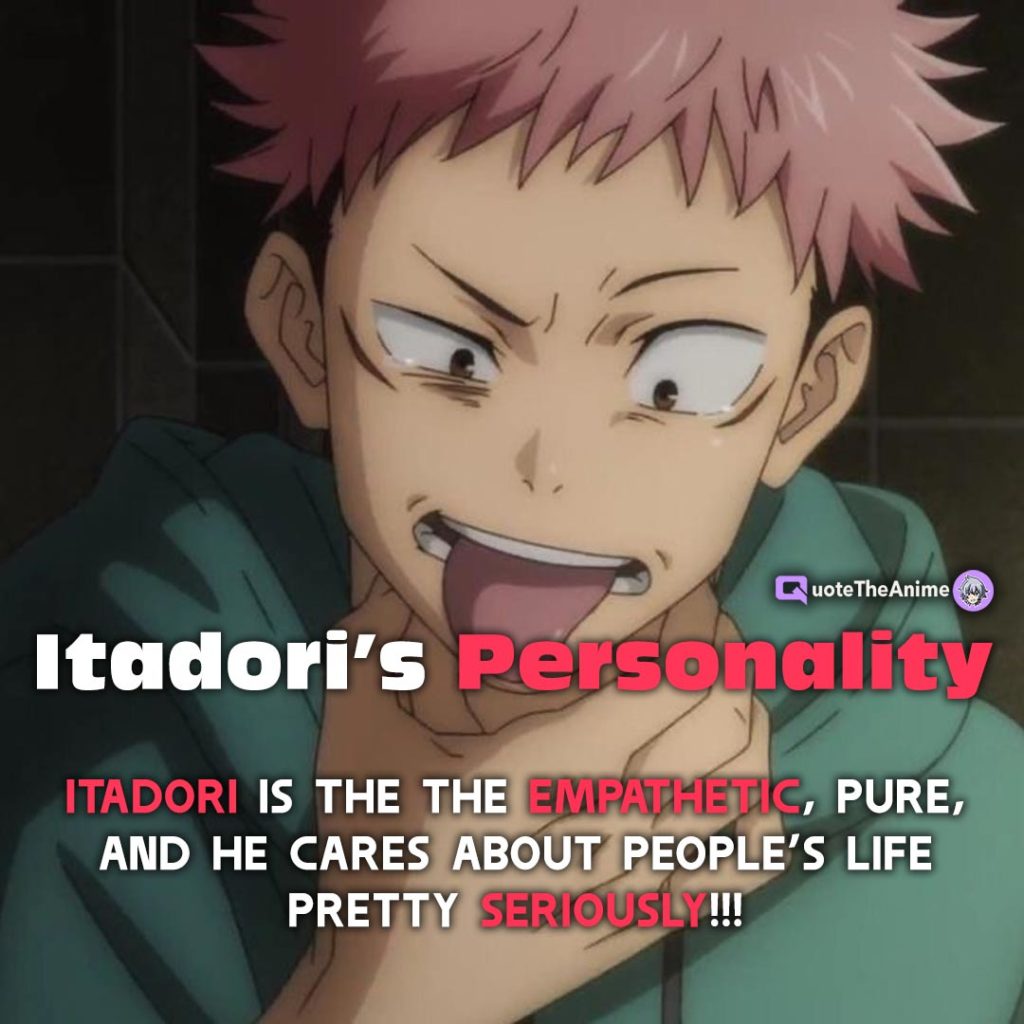 Itadori is the justest person in the Jujutsu Kaisen series. He’s shown to be pretty empathetic and pure when it comes to dealing with situations. His grandpa taught him what it means to be a good person. Hence, Itadori started his way to life by eradicating evil and helping others.

After the last words of his Grandfather, Itadori’s belief was that everyone in the world deserves a fair death. In a world that is run purely by curses, Itadori is fighting by his sheer will power! Even though Itadori is usually fun and cool to interact with, if he encounters something brutal, he’s going to lose it! Being that good-natured has its cons.

In his fight with Mahito, after he saw what happened to Junpei, Itadori lost his cool. From being cool-headed to being the most brutal badass guy out there, Itadori has his charm. However, that doesn’t change the fact that he is pretty afraid of killing others.

In the Anime, Itadori had to go to the dark side to kill the enemies. Even since Junpei, he has never been the same. One of the plus points that Yuji’s personality has is that he’s always willing to sacrifice himself when we talk about innocent people and his comrades. Even when Megumi and Itadori’s school friends were almost going to get killed by a curse, Itadori jumped on impulse and swallowed Sakuna’s finger, making him a host to King of all curses, also known as “SAKUNA!”

All in all, Yuji has a personality without any flaws, making him the purest character in the Jujutsu Kaisen series. 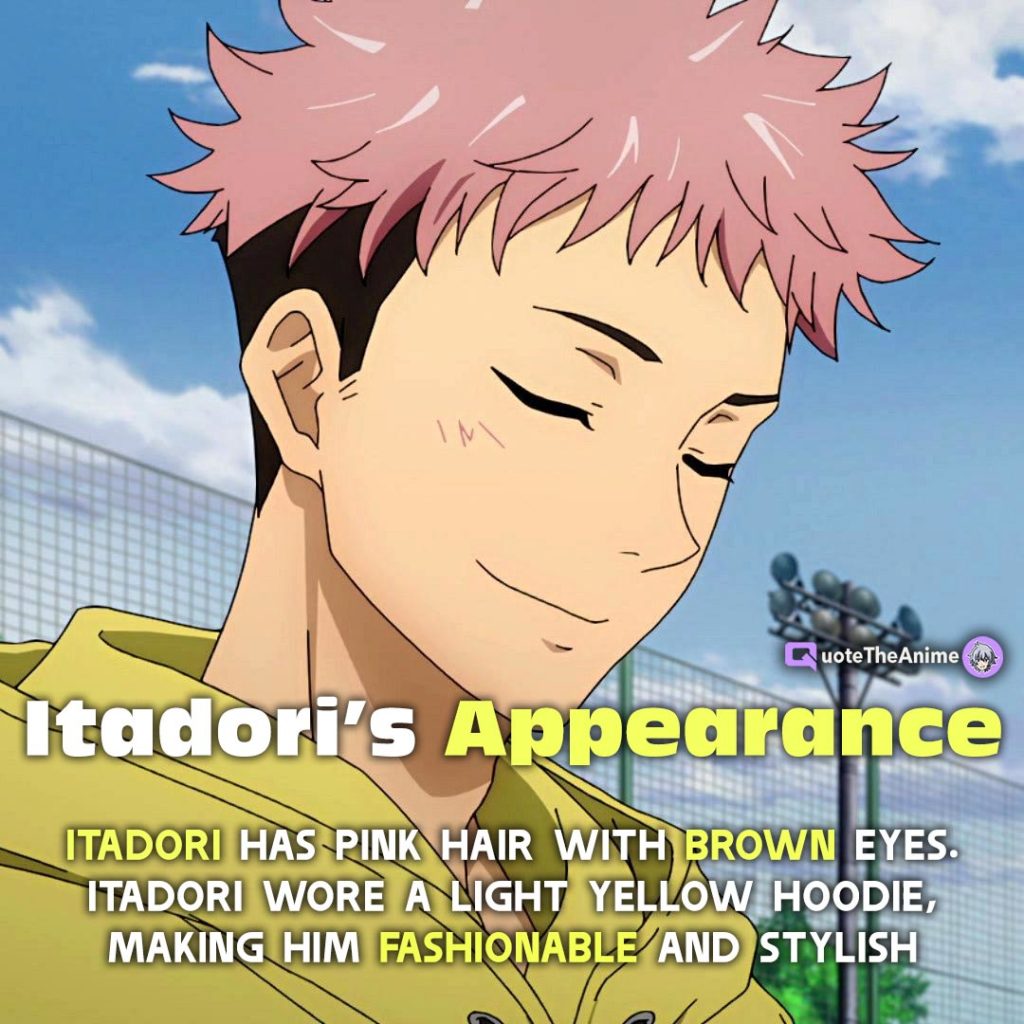 Our muscular badass guy that’s a first-year student in the Tokyo Metropolitan Technical College is muscular. Being proficient in all sorts of sports, Itadori tries to run away from extracurricular activities as he’s too good for it. That’s why he joined the club where he can just chill out.

Itadori has pink hair with brown eyes. Those spiky hair are pretty attractive. After becoming the host to Sakuna, he got two lines under each eye that will open once Sakuna is awakened.

Initially, Itadori wore a light yellow hoodie, making him fashionable and stylish. However, after enrolling in the technical college, Itadori’s style changed. Now, he wears the blue colored uniform of the college.

All in all, Itadori is stylish, and when it comes to his preference for girls, he likes someone tall with a big butt! A man of culture. 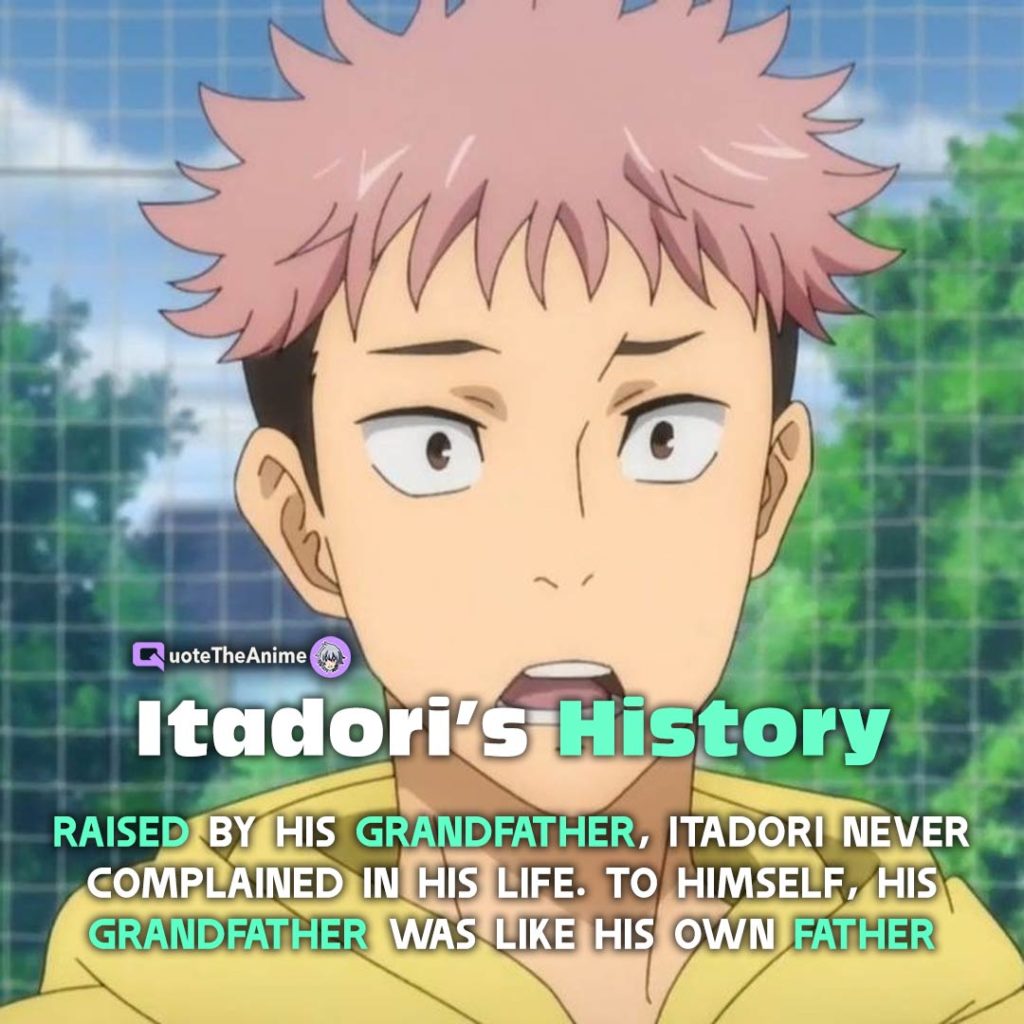 After running away from those sports clubs, Itadori joined the occult club where he could just chill. However, his life was turned upside down when a cursed object started to gather all the curses around the school. Megumi Fushiguro was given a task to receive the cursed object that was potentially risky as it could destroy their world.

After Itadori had an altercation with Megumi, they both decided to run straight to the school. Itadori’s friends from the Occult club were on the brink of death where Megumi tried to fight the curse. However, he was defeated in an instant. Even though Itadori had no idea what the hell was going on, he still decided to jump in and fight the curse.

After finding out that the cursed object was the root of all evil, Itadori simply swallowed it. This was a jaw-drop moment in the Jujutsu Kaisen series. That’s where the actual story started. Being under the control of the King of all Curses, Itadori was out of control. However, after fighting Gojo sensei, things changed. 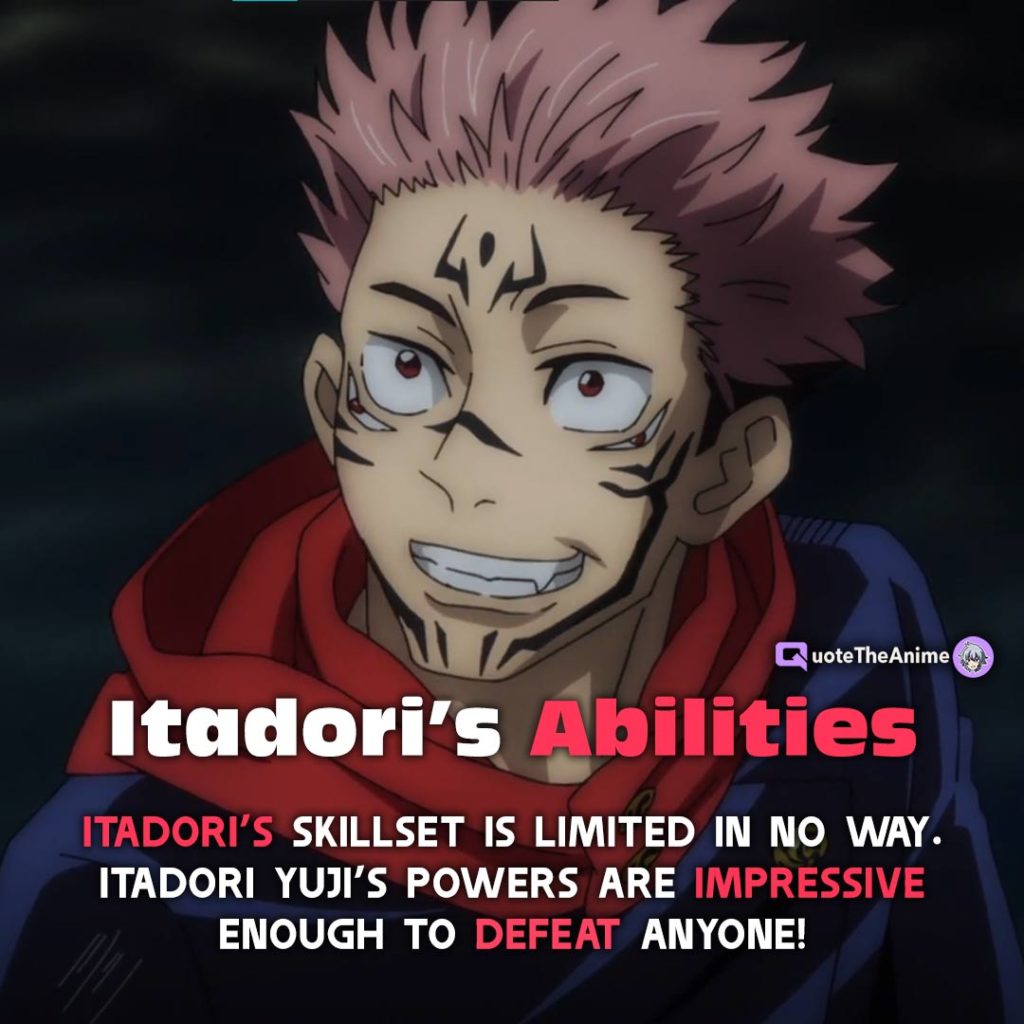 Itadori’s skillset is limited in no way. While he’s still trying his best to find the true powers, here are some of Itadori Yuji’s powers that are impressive enough to defeat anyone!

Humongous Strength: If Itadori is known for his fighting abilities, most of the part goes into his strength. Even before becoming the Jujutsu Sorcerer and a host to Sakuna, Itadori was a muscular teenager who was just too overpowered to join any sports club. Everyone was afraid of his intimidating strength. Moreover, after he found out his abilities as a Jujutsu Sorcerer, Itadori decided to train his body even more.

Being so overpowered that as a normal human being, Itadori was able to throw a full-fledged car with his bare hands. His raw strength is comparable to Kento Nanami, who is a Grade 1 Sorcery.

Durability: Another enhanced feat of Itadori is his durability. You can beat this bad boy for hours and he won’t feel anything. An average sorcerer is nowhere near as durable as Itadori. Moreover, after becoming a vessel to Sakuna, Itadori is practically immortal. No matter how many wounds he has, Sakuna can heal them, no questions asked.

The Jack of All Trade: Itadori is also called “The Tiger of West Junior High” due to his enhanced strength. This happened even before he decided to become a Jujutsu Sorcerer. However, after becoming the Vessel to Sakuna, Itadori got to a whole other level. His usual power is enough to control the King of All Curses. Moreover, his Jujutsu powers incorporate changing the structure of souls, making him hurt one of the major villains called “Mahito”

Unreal Reflexes and Crazy Speed: Throughout the series, Itadori has surprised us with his reflexes and speed. If we talk about a 50-meter race. Itadori was able to finish the whole race in just 3 seconds. In the Kyoto fight arc, every Jujutsu Sorcerer from Kyoto school tried to kill Itadori with their killing intentions, however, Itadori was able to dodge all of the attacks, making him one of the strongest and fastest characters from the Jujutsu Kaisen series.

Learning Abilities: Itadori is one of those Anime characters who will watch as they learn. He’s always asking unique questions to his teachers, and when it comes to adaptability, Itadori is crazy. Hence, it is so easy for Itadori to watch and learn. In his fight with Aoi Todo, he would go hand to hand with the mad lad as he taught him various stuff. Moreover, every time he receives a cursed object, Itadori is the quickest one to learn!

Impressive Hand-to-Hand Combat: For the most part, hand to hand combat is Itadori’s 2nd strongest feat of all his abilities. He is always so quick to respond, and when it comes to troubleshooting the danger, Itadori plays along. He will always analyze the situation and make the best out of his environment. In his fight with Todo, Itadori fought with a literal beast. Even though Itadori was getting his butt kicked at first, he quickly got jist of the whole situation and started to fight Todo on equal grounds.

Yuji can stop even the most powerful blows, and then he can adjust the powers in his blows as well. His martial arts style is known as “Taido Martial Arts.” Moreover, Manji Kick is another ability that Itadori uses with a mix of his cursed energy. By combining the cursed energy to move his leg upward to kick his opponents, Itadori defeated most of the cursed spirits.

Resistance to poison: Being the host to Sakuna, Itadori is practically immortal in every way. However, when it comes to different types of poisons, he won’t die from them. Even though his body might be weakened by the effects that these poisons have, his ability to regenerate and resist the harmful rays are on a whole other level.

Divergent Fist: The most popular Jujutsu power that Itadori uses is called the Divergent Fist. Whenever Itadori lands a serious punch, the cursed energy will flow, and it will encourage a second blow with an even greater impact. Even though he’s been using it to fight the low-grade monsters, at some point in the series, after fighting with Aoi Todo, Itadori completely stopped using this power.

Being the most to Sakuna, Itadori has an Immense Cursed Energy. Even though he doesn’t have anything special when it comes to cursed energy, Itadori is a professional when it comes to controlling the energy. This figures why it was so easy for Itadori to control Sakuna who is the king of all curses. Using his immense cursed energy and mixing it with martial arts, Itadori fights in the most powerful way possible.

After receiving training from Gojo, Itadori became even stronger, and after having to fight Mahito for the second time, he became pretty darn strong in every way. 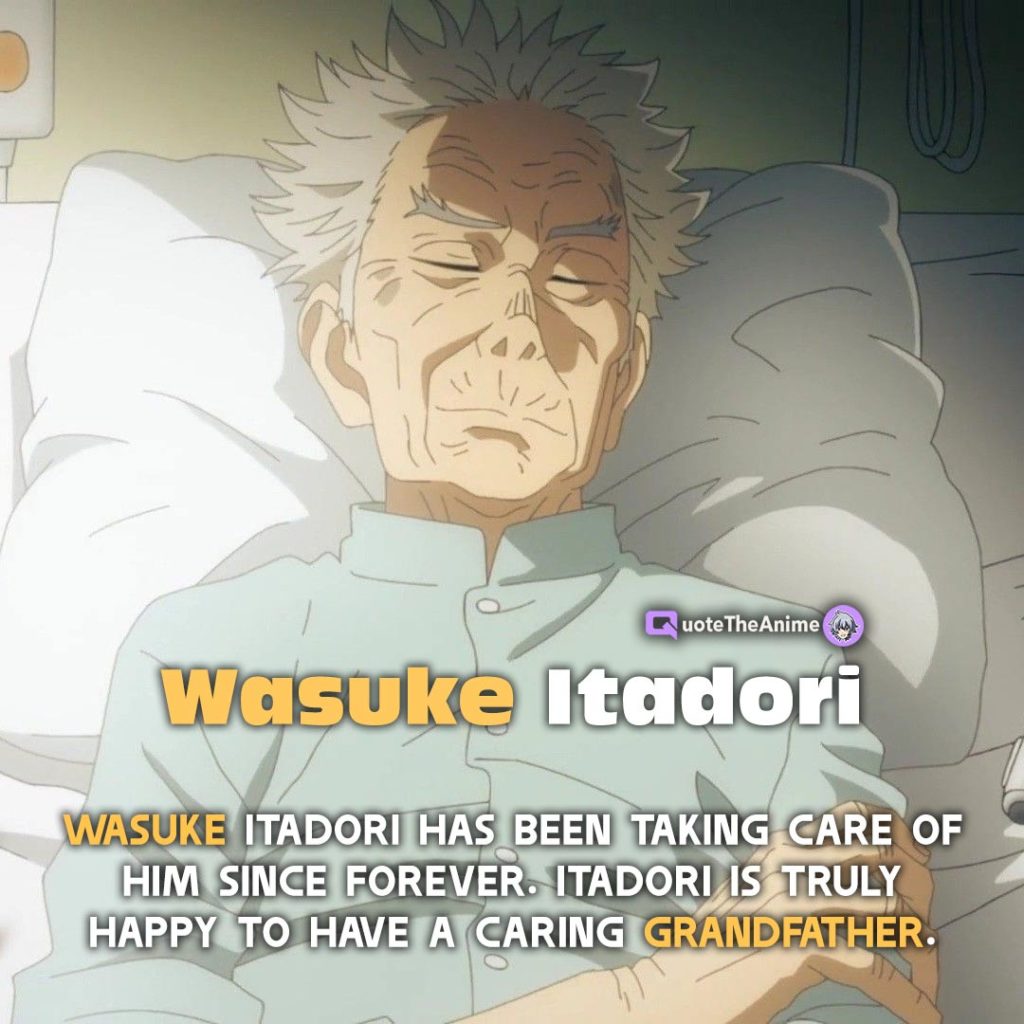 Itadori’s grandfather, Wasuke Itadori has been taking care of him since forever. Itadori is truly happy to have a caring grandfather. And when it comes to visiting his grandfather, Itadori is pretty regular. On his deathbed, Wasuke’s words left a deep impact on Itadori’s heart, changing his personality from head to toe. That’s why the Itadori we see now is so empathetic and always worrying about how to fix the world. 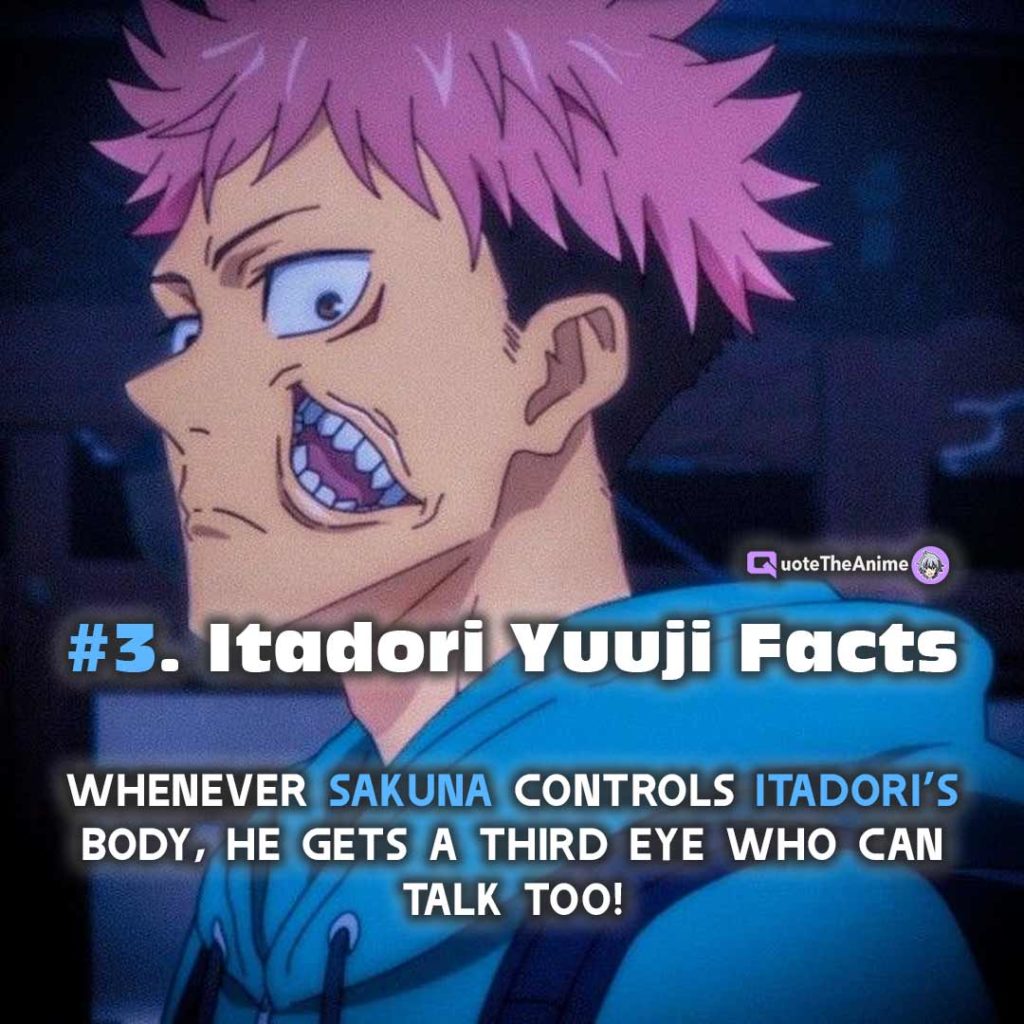 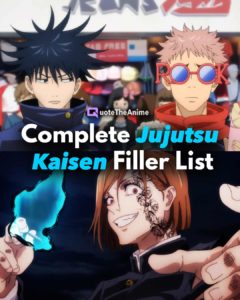 COMPLETE Jujutsu Kaisen Filler List! (OFFICIAL) “I’m the strongest” – Gojo Okay, sir, we get it. You’re the strongest! This anime has my heart along 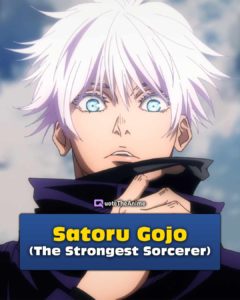 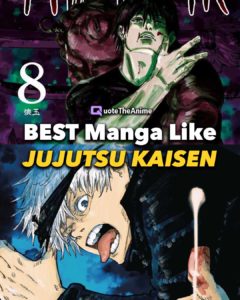 16+ CRAZY Manga Like JUJUTSU KAISEN (Recommendations) Jujutsu Kaisen has been the talk of the town since it arrived in Shonen Jump. It’s not that