Manhwas have become quite popular these days. Manhwas like Tower of God, God of Highschool, and True Beauty are quite popular and fans love them. Unlike mangas, Manhwas are colored. However,  only a few of them get adapted into anime series or dramas.

Solo Levelling is also one of the famous Manhwas. It is a South Korean Web Novel written by Chugong.

Its characters are well written and the art style is amazing. The fight scenes look amazing and fun to read. 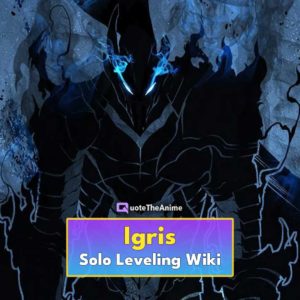 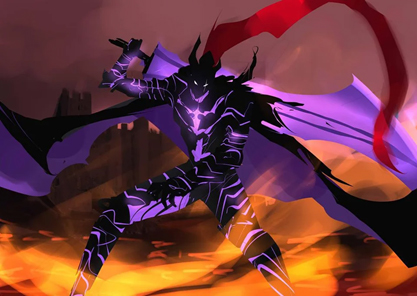 Like other members of Jin Woo’s Shadow army, he is a shadow and a knight with Purple radiance. Like other knights, he wears armor. His armor is black-colored that covers him from top to bottom. He also rocks a tumble-downed black cape. He also has a Red hair accessory extending from his helmet. Igris also owns a long sword.

Before becoming a shadow soldier, his armor was red from top to bottom. 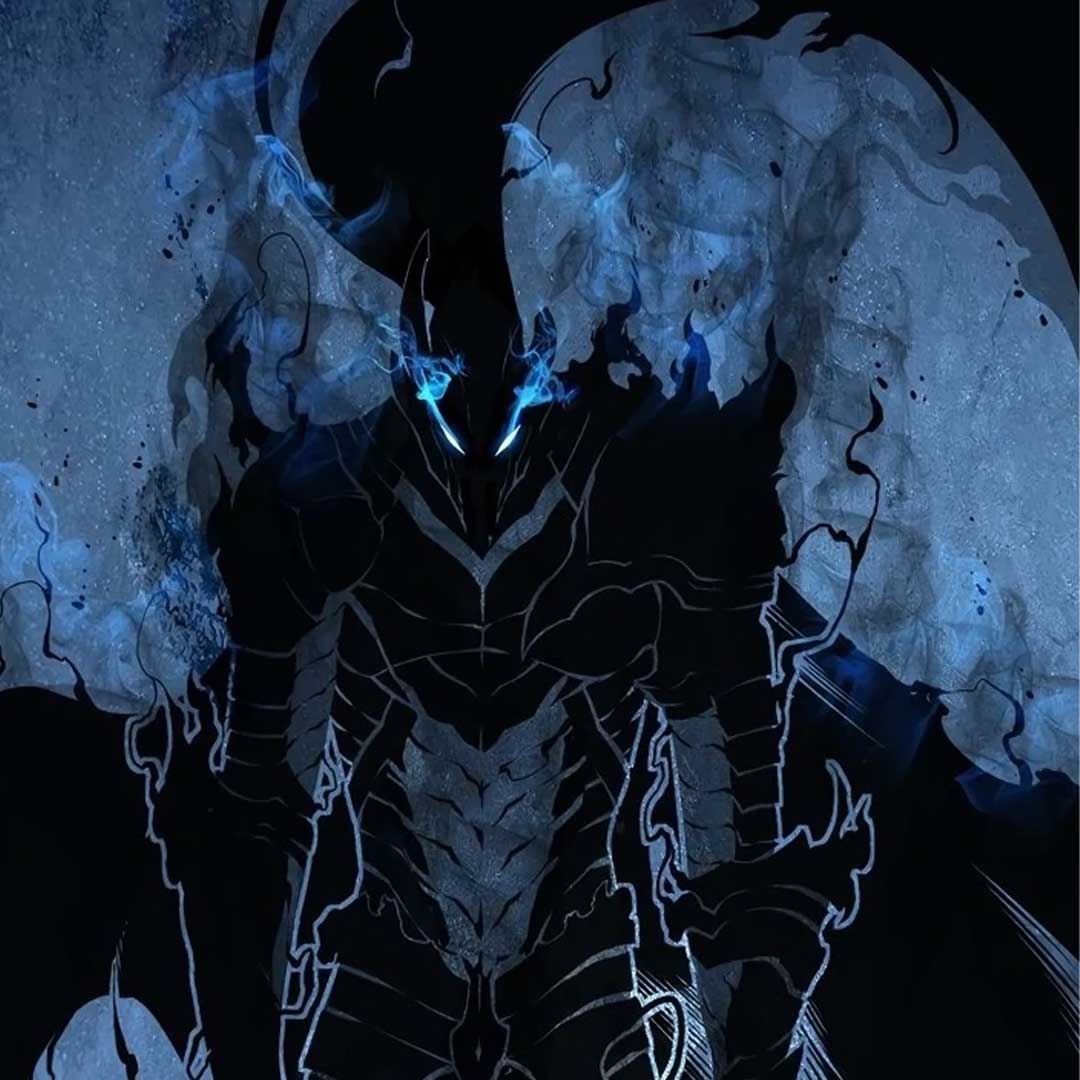 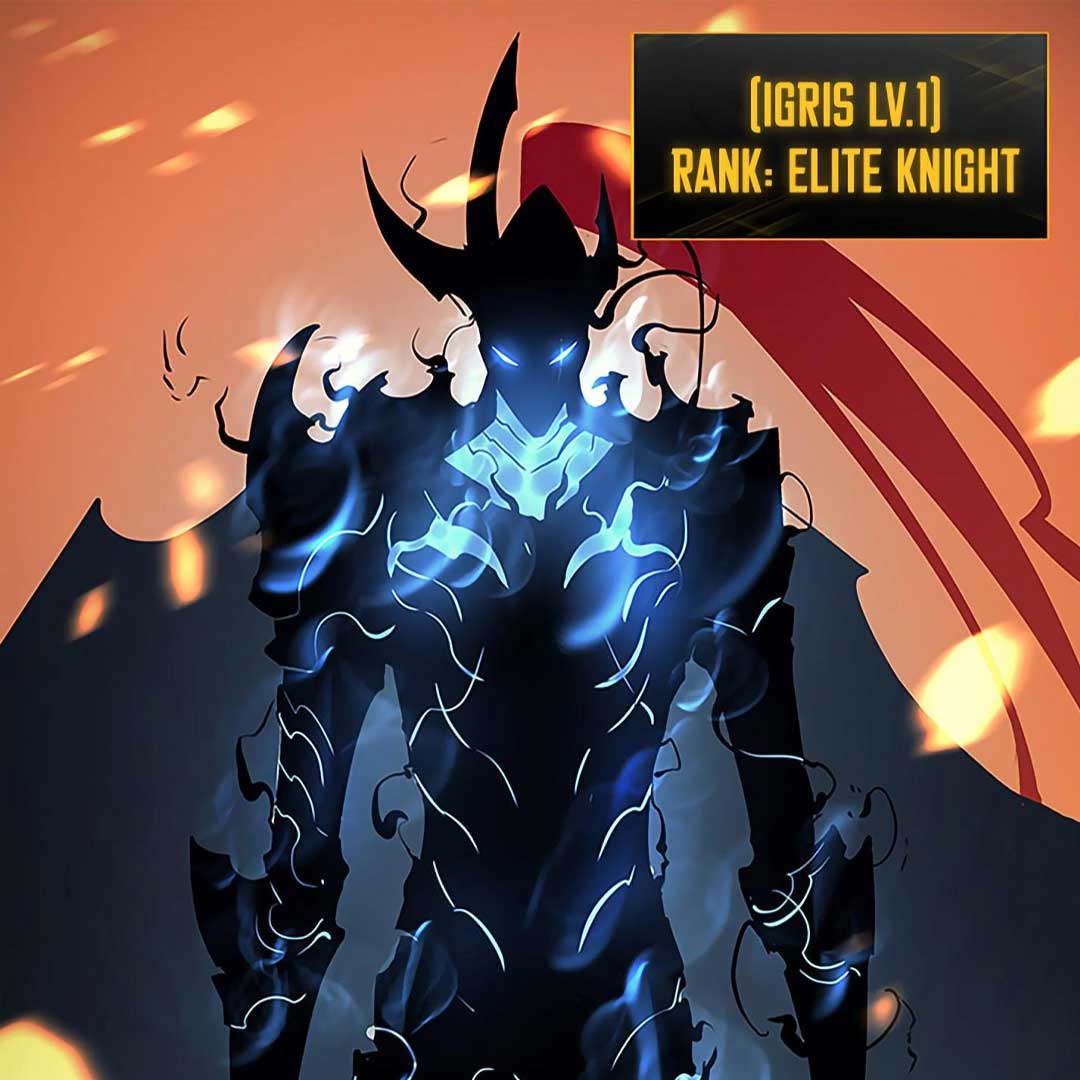 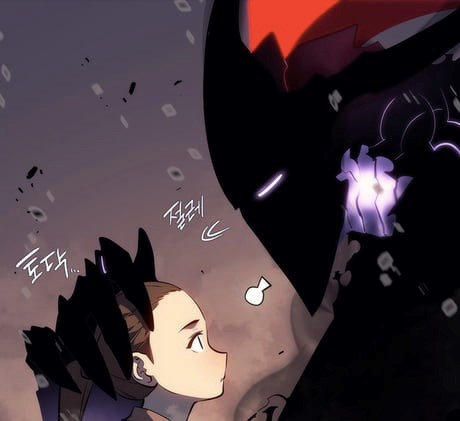 Knights are often considered ruthless and emotionless killers. However, Igris is not like that. He expresses his emotion.

Igris is very Gallant, loyal, and dutiful towards his master. Even before becoming a part of Jin Woo’s shadow army, he was guarding an empty throne that clearly shows his loyalty. He obeys Jin Woo’s every order and is loyal to the extent that he kneels before Jin Woo whenever he is summoned or completes a fight.

It seems quite weird that he brings the head of the ones he kills to Jin Woo. This ultimately turned out quite troublesome as Iron started copying him.

Igris is very intelligent too. He uses different tactics in battles and analyzes his opponents. He doesn’t get overboard in battles. 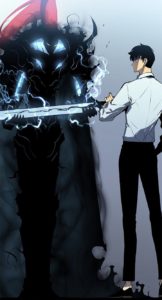 Igris has great fighting abilities. He is a master of sword and can tank massive attacks. He is one of the strongest shadow soldiers and an important part of Jin Woo’s army.

Despite his abilities, he could not keep up with Cha Hae-in and lost.

In his fight against Jin Woo, he should have been able to defeat him as he was more agile and stronger than him. But, his mistake was that he underestimated Jin Woo. That resulted in his loss.  (Chapter 40)

He can manipulate things from afar. He can be seen summoning his sword back to him during his fight with Jin Woo. This ability is later explained to be a lower version of Ruler’s Authority.

He has no particular weakness as he has unlimited stamina and his regeneration depends on Jin Woo’s mana. 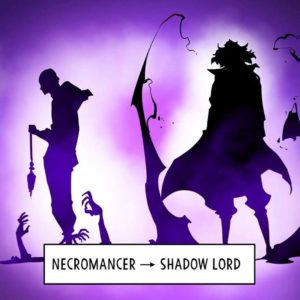 Jin Woo was granted the skill to extricate shadows when he defeated an army of shadow mages. Manga Chapter 45. When he tried to extract Igirs’s shadow, he failed at first. Jin Woo soon realized that Igris’s shadow cannot be extracted as he was guarding a throne and committed to it. He then convinced him to join his army by telling him that there is no point in defending an empty shadow, you should follow and serve me. 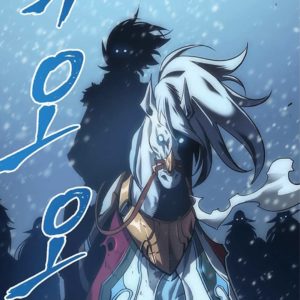 After Sung Jin-Woo got imprisoned inside a red gate with Han Song-I,  A-Rank hunter Kim Chul and other hunters of White Tiger Guild, Jin-Woo released Igris and other shadows to fight Ice bears. Igris afterward defeated the Leader of the ice bears using his sword. Then, he killed Kim Chul who was trying to kill Jin Woo. Jin Woo extracted his shadow and named him Iron. Manga Chapter 53

Later, Iron, Jin Woo, and Igris defeated the dungeon boss and cleared it. 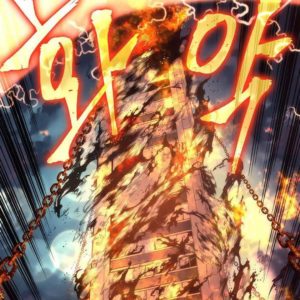 Sung Jin-Woo went on to clear the Demon Castle Dungeon. Manga Chapter 58. Being the strongest shadow at that point, Igris played an important role in the dungeon’s clearance.

Igris had a habit of bringing the head of the enemies he defeated to Jin Woo. Seeing this, Iron started copying him and this became quite a headache for Jin Woo. Jin Woo then asks Igris to put an end to his habit. 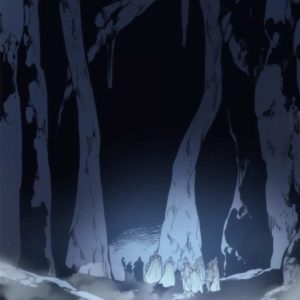 Sung-jin Woo disguised himself as a miner and went on a raid with the Hunters Guild. Inside the dungeon, they encountered a high orc Wizard Kargalgan. When he realized that this was getting out of hand and the guild members were weak, he unleashed Igris and other shadows to defeat the orcs. He used his Monarchs Domain skill to finish the fight quickly. Manga Chapter 70

Igris was able to defeat one of the generals of Kargalgan’s army while sending others flying with a single swing.

Sung Jin-Woo did not clear this dungeon at one go. He cleared it step by step while leveling up. As Jin Woo levels up, his shadows get stronger. The same is the case with Igris, as Jin Woo reached floor 89, Igris too evolved from a Knight to Elite Knight gaining a whole lot of abilities.

At that point, Igris was as strong as an S- Rank hunter. In their fight against Baran ( Demon King), Igris tried to ambush him but all in vain, as Baran threw him away with a single blow. Manga Chapter 87 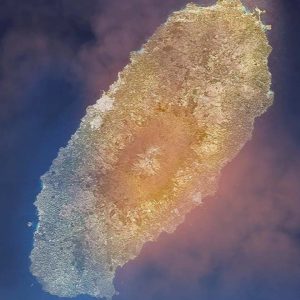 Jeju island is one of the major arcs of Solo Leveling with some great moments. Sung Jin-Woo initially declined to help in the Jeju island raid. But, as he realized that the raid was getting out of the hands of other S-Rank hunters, he had to go there and help them. Manga Chapter 101

Sung-jin Woo summoned his shadow soldiers and Igris to wipe out the ants and protect other hunters. Igris was able to defeat the ants quite easily. 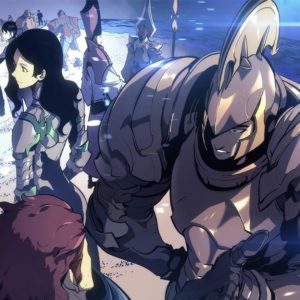 As Jin Woo decided to start his guild, Cha Hae-in wanted to join it. Sung Jin-Woo decided to conduct a test to test her abilities. Jin Woo did not send Beru as he thought it would be difficult for her to fight against Beru after her experience in Jeju Island. Instead, he sends Igris. Though Igris is on the level of an S-Rank hunter, he was easily defeated by Cha Hae-In.  Igris used the Demon King’s Longsword in this battle. Despite his weapon, his defeat was unavoidable. Cha Hae-in smashed him into the wall creating a huge hole. Manga Chapter 113 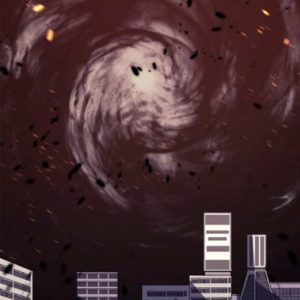 As a huge S- Rank gate appeared in Tokyo, it was a huge problem for the whole world. Jin Woo was asked to take care of this problem. As Jin Woo reached there, he deployed Igris and Iron to defeat the remaining giants in the city ruins.

Igris saved a little girl from a giant as he was trying to eat her and sliced the giant. After that, he had to protect the girl with his armor as Iron destroyed a giant with force more than necessary creating a giant eruption of debris. Manga Chapter 134 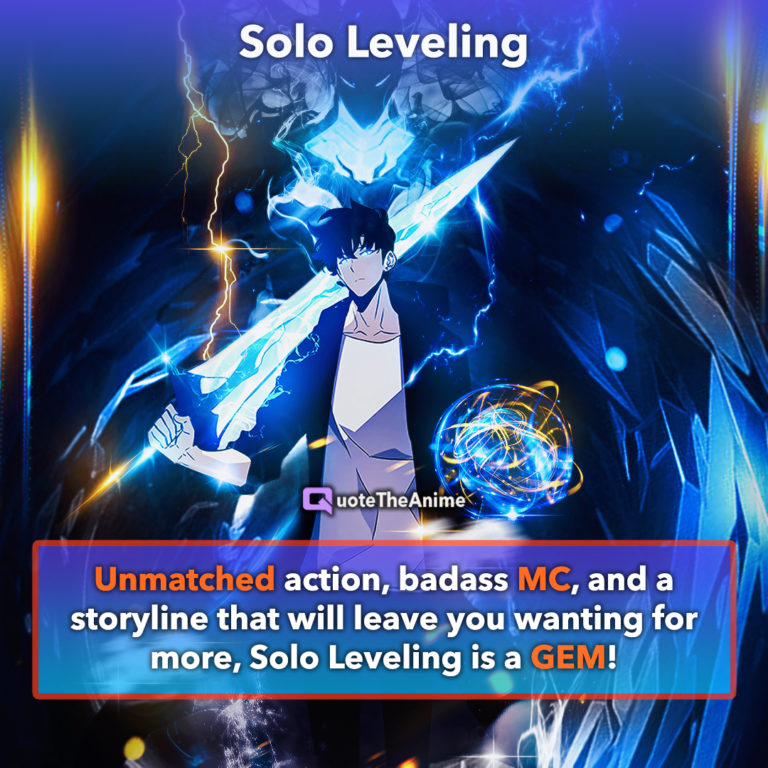 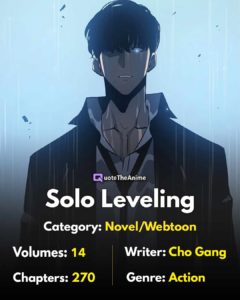 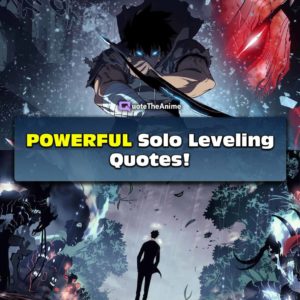 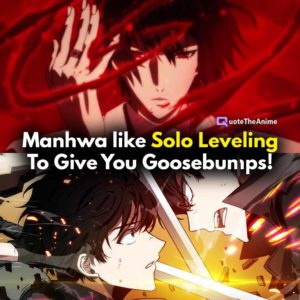 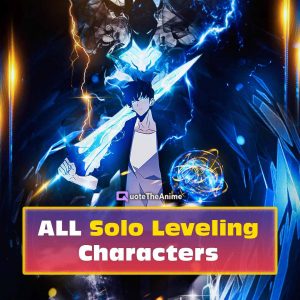 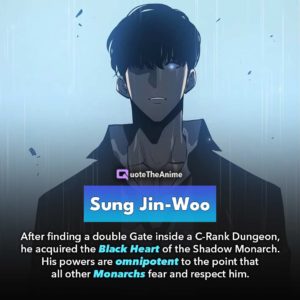 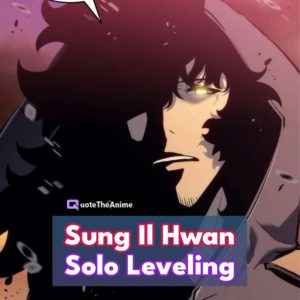 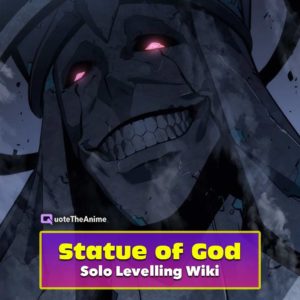