Black Clover has been successful in continuously impressing it’s fans and creating a very loyal fanbase because of its amazing storyline and a huge number of characters that are unique in their own way. Keeping that in mind, we have created this quiz for you to find out which character do you resemble the most!

You can take the quiz above to find out who your personality twin is. What are you waiting for? LET’S GO! 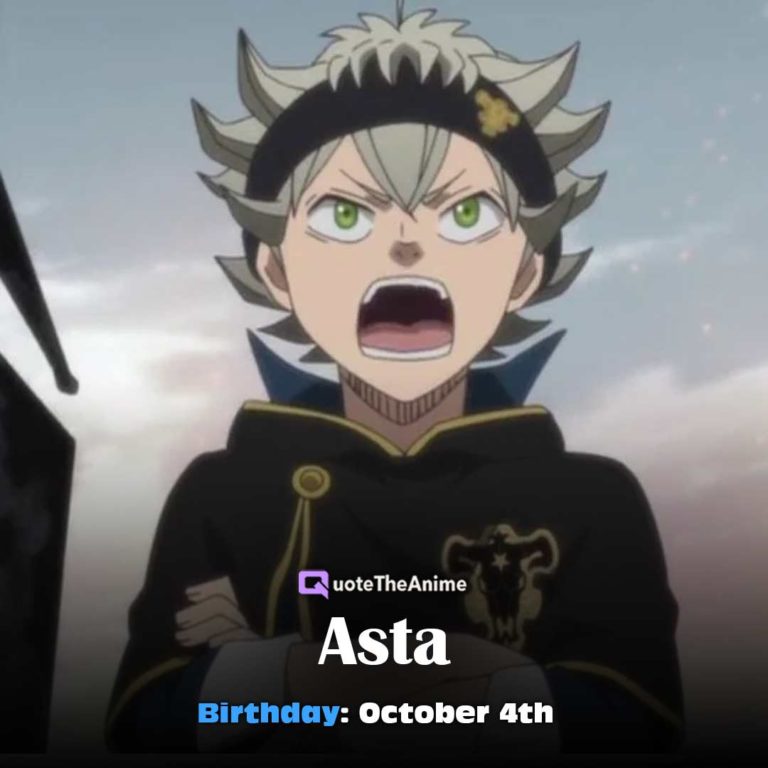 Have you ever come across that super annoying, loud and hyperactive kid? Yep, that’s Asta in general. Asta is a very cheerful guy who smiles through adversity. The strongest aspect of his personality is that he never gives up. No matter how bleak things are, he’ll do his best to get through them.

Having a very strong sense of justice, Asta does his best to protect everyone around him from getting hurt. He’s very protective of his friends and never leaves them alone no matter what, always lending them a helping hand.

Asta is also very oblivious to his surroundings. Both Noelle and Mimosa, having a crush on him, always drop hints. However, Asta always fails to notice them and goes about his day without even paying attention to their hints. This adds to his annoying nature. 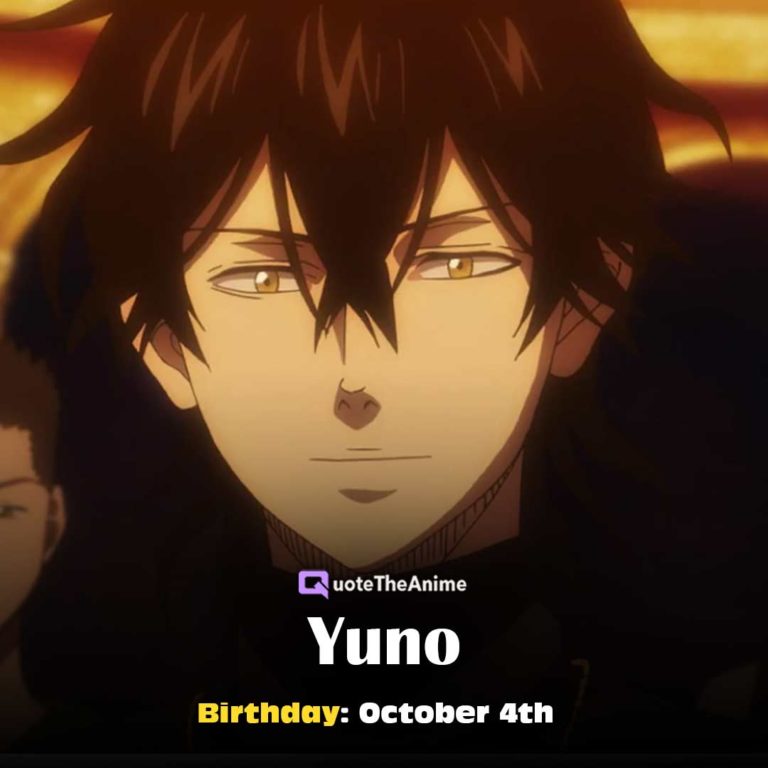 Yuno looks very calm and serious all the time, even emotionless most of the time. He has trouble conveying his feelings to others, mostly making people misunderstand him. Yuno is very competitive and desperately wants to be the next Wizard King. For that, Yuno works very hard to keep himself stronger than anyone else.

When Yuno used to be a kid, he was a coward and a crybaby. But because of Asta, his personality entirely changed and he became physically as well as mentally resilient. He might look selfish sometimes, but Yuno is extremely protective of his friends, especially Asta. He doesn’t really accept that he cares about Asta. However, he greatly looks up to Asta and secretly wants to be like him. 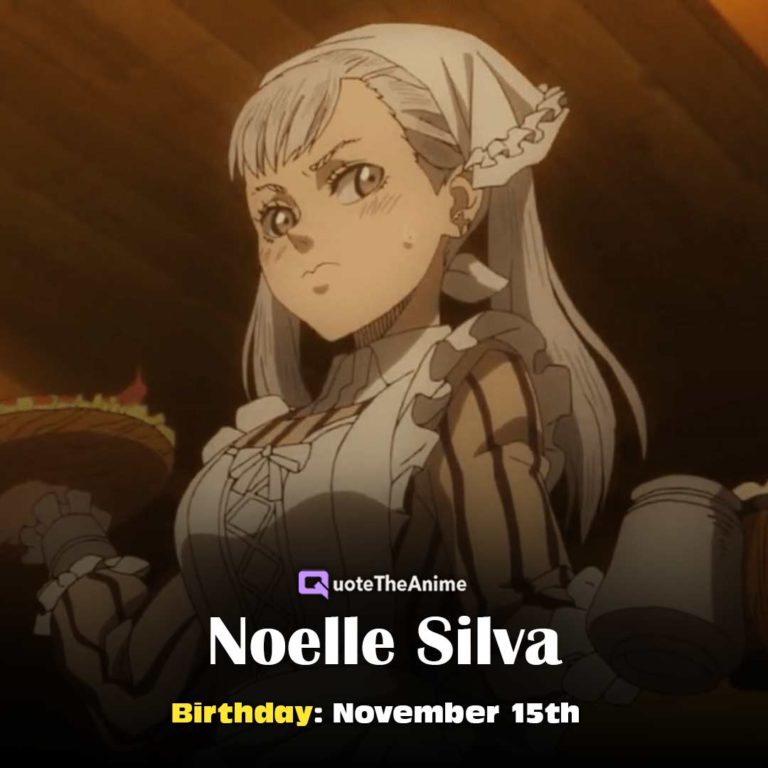 As Noelle belongs to the royal family, she retains the arrogance and vainness in her personality. She initially looked down upon others and tried to exploit her status. However, after meeting Asta and others from Black Bulls, she changed a lot. She became more tolerant and less selfish, always helping those in need.

Noelle is the true definition of a Tsundere. She’s secretly in love with Asta. However, she gets all flustered when Asta gets too close to her or tries to compliment her.

Noelle’s siblings treated her like garbage and that’s why she lost all her confidence, considering herself to be very weak. However, with the help of Asta and other Black Bull members, Noelle was able to make her insecurities vanish and became more confident, even stronger than before. 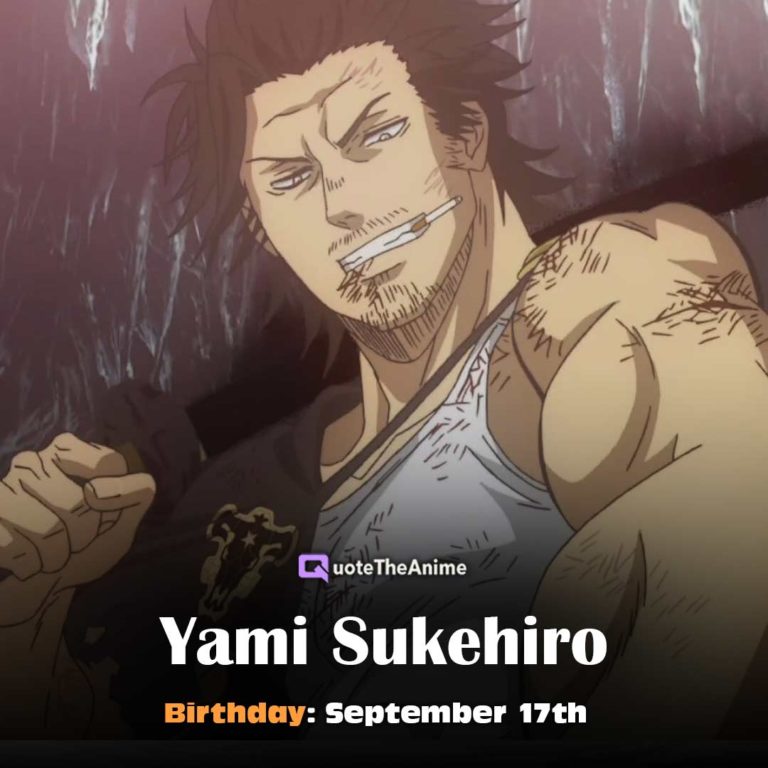 Yami is an intimidating, tall, short-tempered AND reckless guy who is developing all the members of Black Bulls slowly and steadily. At first, we’re forced to think that Black Bulls are the worst Squad for a reason. However, we realize that Yami is not what he seems like in the slightest.

Yami is stoic and strong-willed. He believes that one should act more than just speak. He believes that there’s no easy way for anything. Therefore, he often makes his squad members go on dangerous missions for the sake of their development.

Yami is very hot-heated and can easily be incited. He intimidates his squad members by just giving them a threatening glance. Despite everything, he cares deeply for his squad members, always pushing them forward and helping them with their issues.

The best thing about Yami is that he does not give different treatment to the royals. His squad has every kind of person and he treats all of them equally. 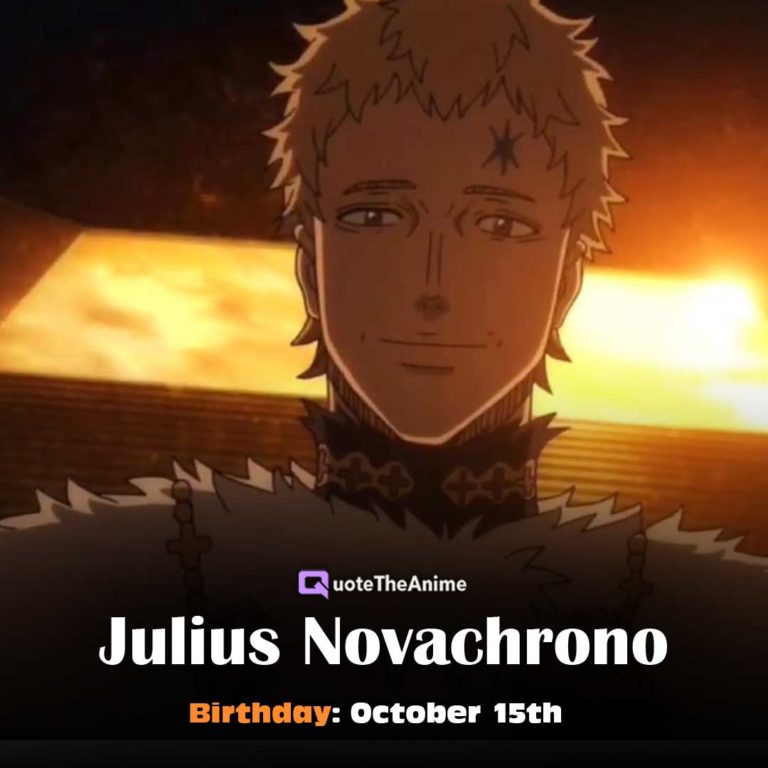 Julius Novachrono is the present Wizard King and has an extremely kind-hearted nature. His kind eyes are very charming and instantly melt our hearts. Despite his kind and caring nature, Julius can’t help show his excitement when anyone talks about magic. He’s clearly obsessed with it, often revealing his childish nature.

Having explored a lot of magic kingdoms, Julius has vast knowledge about most things. He’s very wise and smart. Julius deeply cares about the people of his kingdom and works hard for their safety. He’s very friendly with the magic knight squads’ members and talks with them in a soft manner. Despite his high rank, Julius does not discriminate between different classes. He treats everyone equally and gently. 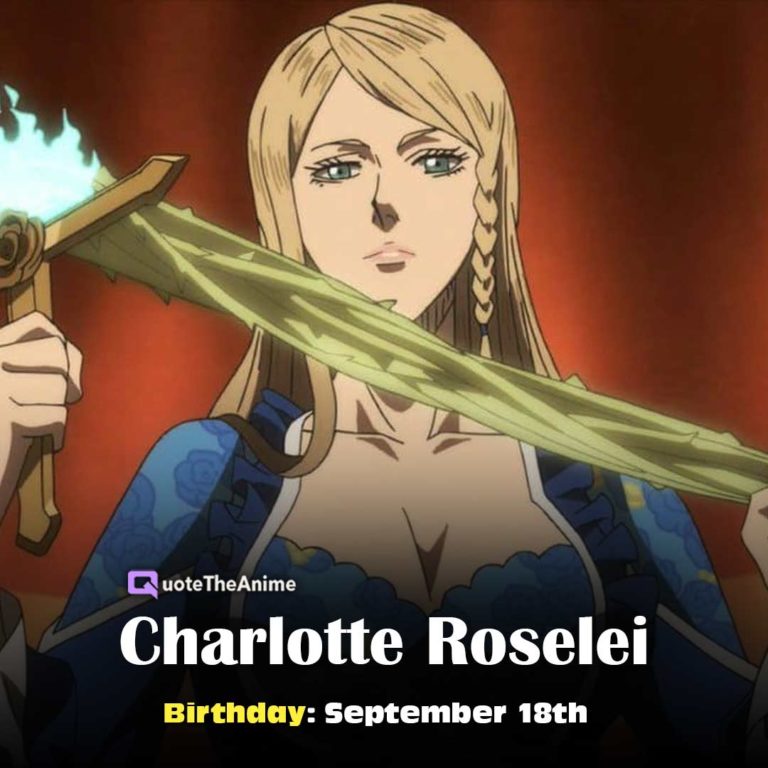 Charlotte Roselei, the gorgeous Captain of Blue Rose Squad, is a graceful, quiet and serious young woman who stays true to her duties and is very diligent. She does not show reactions to most things as she can control them well and often appears indifferent.

The only time when Charlotte has trouble controlling her emotions is when  Yami is near her. She has a secret crush on Yami and admires him greatly as he saved her once. She becomes quite flustered when Yami comes to her without prior notice, which is extremely adorable.

Charlotte used to hate men and even her squad included all women. However, Yami is the only guy Charlotte doesn’t seem to hate. She’s very protective of her squad and is always there to help the other magic knights whenever there’s some sort of calamity. 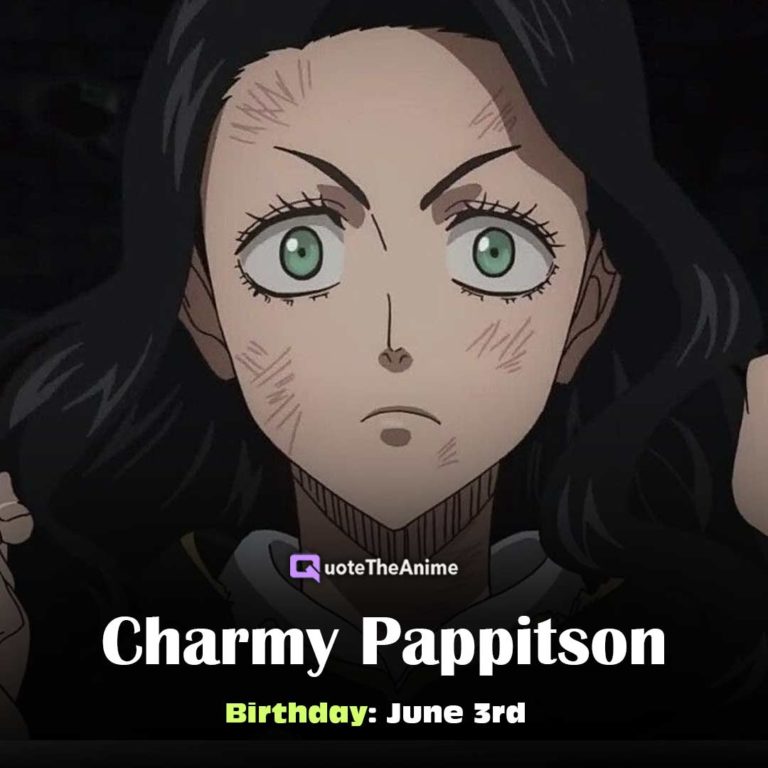 Charmy is extremely gluttonous and is always thinking about food. She loves food to the point that she often ignores the bigger problems going on around her and focuses on filling her tummy with food.

Despite being gluttonous, Charmy is a very generous person. She loves sharing her food with her squad members and makes sure they’re eating well. She also has a carefree personality that makes it easier to approach her. 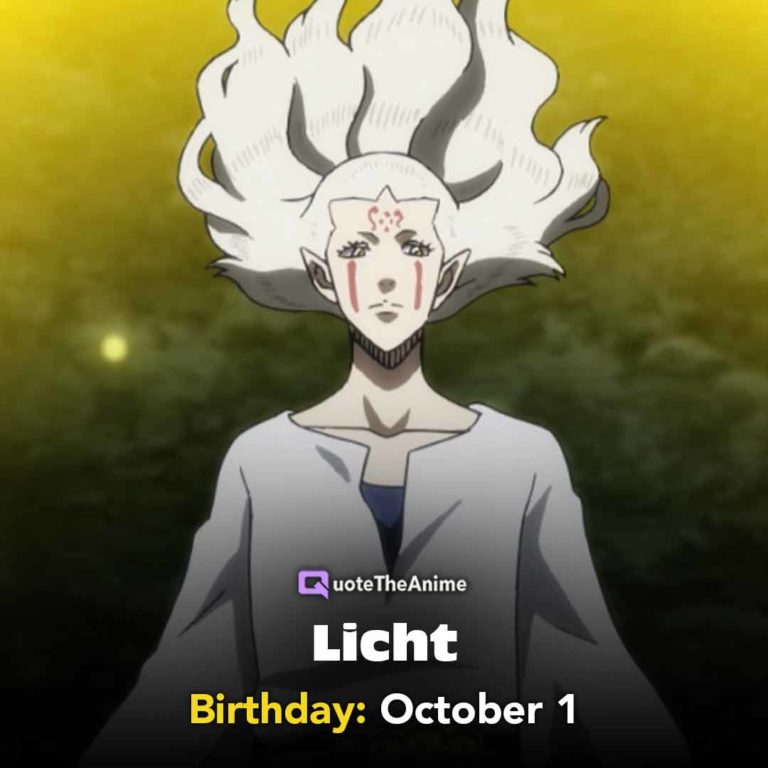 In the past, Licht has shown to be a very kind and compassionate person. As an elf, he believed in the friendship and peace between humans and elves. He stayed very loyal to the humans, always welcoming them.

After the massacre of elves and his resurrection, Licht became emotionless. He started hating humans as he thought they were the ones who betrayed the elf tribe and killed them. However, after everything came to light, Licht regained his old personality and became kind again. 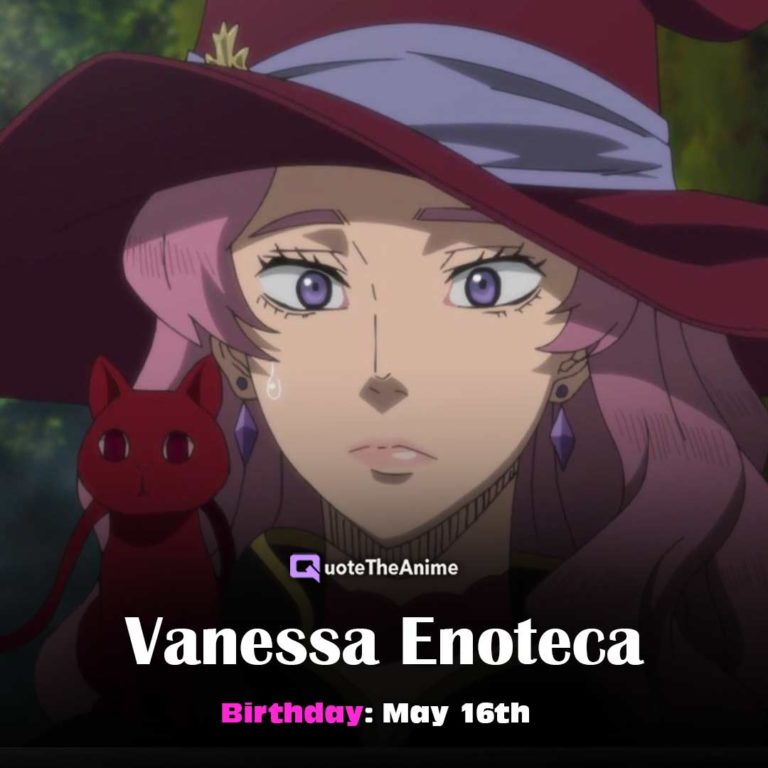 Vanessa is one of the Black Bull’s members and is a very calm and relaxed person. She is very flirty and loves to drink wine. She’s always seen to be intoxicated and sleepy, mostly dozing off.

Vanessa had a harsh past and she feels greatly indebted to Yami because he was the one who saved her. She’s shown to be a very caring person as she always helps Noelle whenever she’s having some problems. Other than that, Vanessa is a clever opponent. She’s not easily swayed and gives her opponents a very tough time. 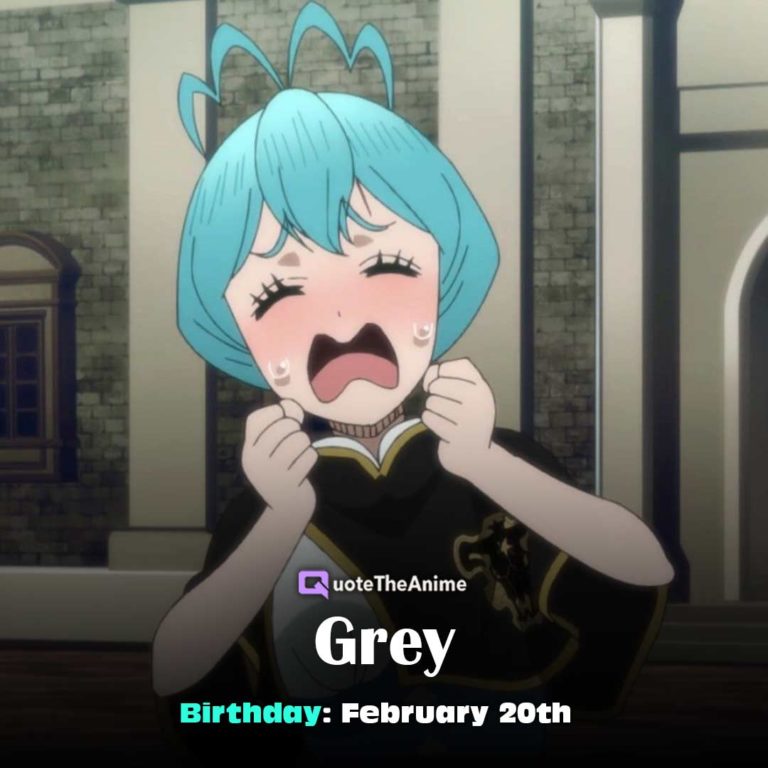 Grey’s introverted personality is definitely over the top. Most of the time, she’s flustered about her surroundings and does not like to be noticed. She’s seen to be embarrassed by herself and people giving her unwanted attention.

Despite being extremely shy, Grey is shown to be very kind-hearted. Her kindness often brings out her naivety. She used to get abused by her stepsisters and stepmother constantly. However, she did her best to mend her relationship with them, transforming herself and looking more like her sisters to fit in with them. 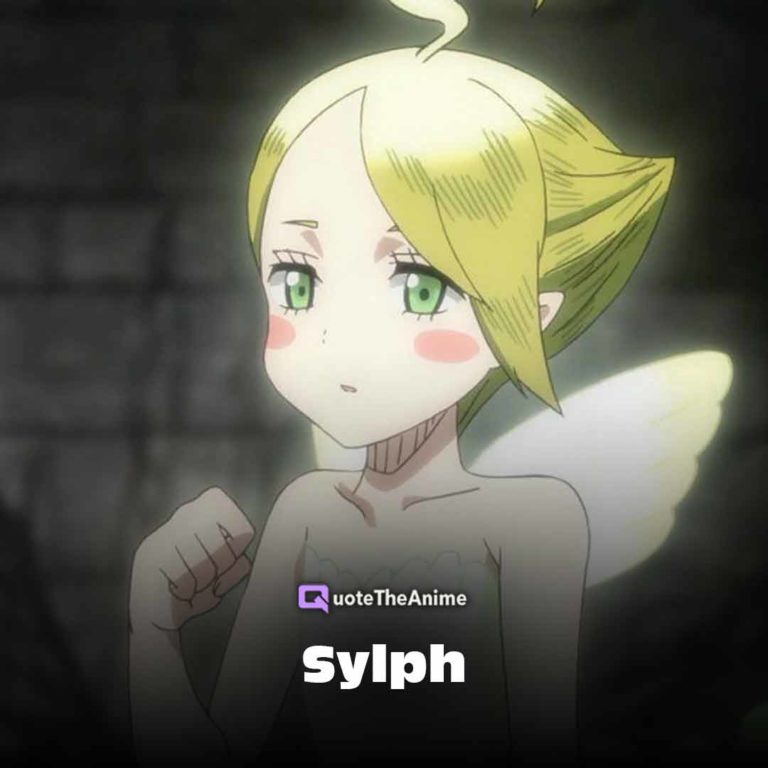 Sylph is the adorable little spirit that serves Yuno. She has a playful personality and often becomes violent. She can’t bear watching anyone getting close to Yuno as she has a very possessive nature.

As she’s greatly obsessed with Yuno, she’s also very protective of her. She fights alongside him and proves to be a great aid to him whenever he’s fighting stronger opponents. She becomes a bit more serious after she almost loses Yuno.

Black Clover graces us with a bunch of very versatile and interesting characters with unique traits. We’ve incorporated a few characters in this quiz and we hoped you liked taking it. Comment down below which character you share your personality with! 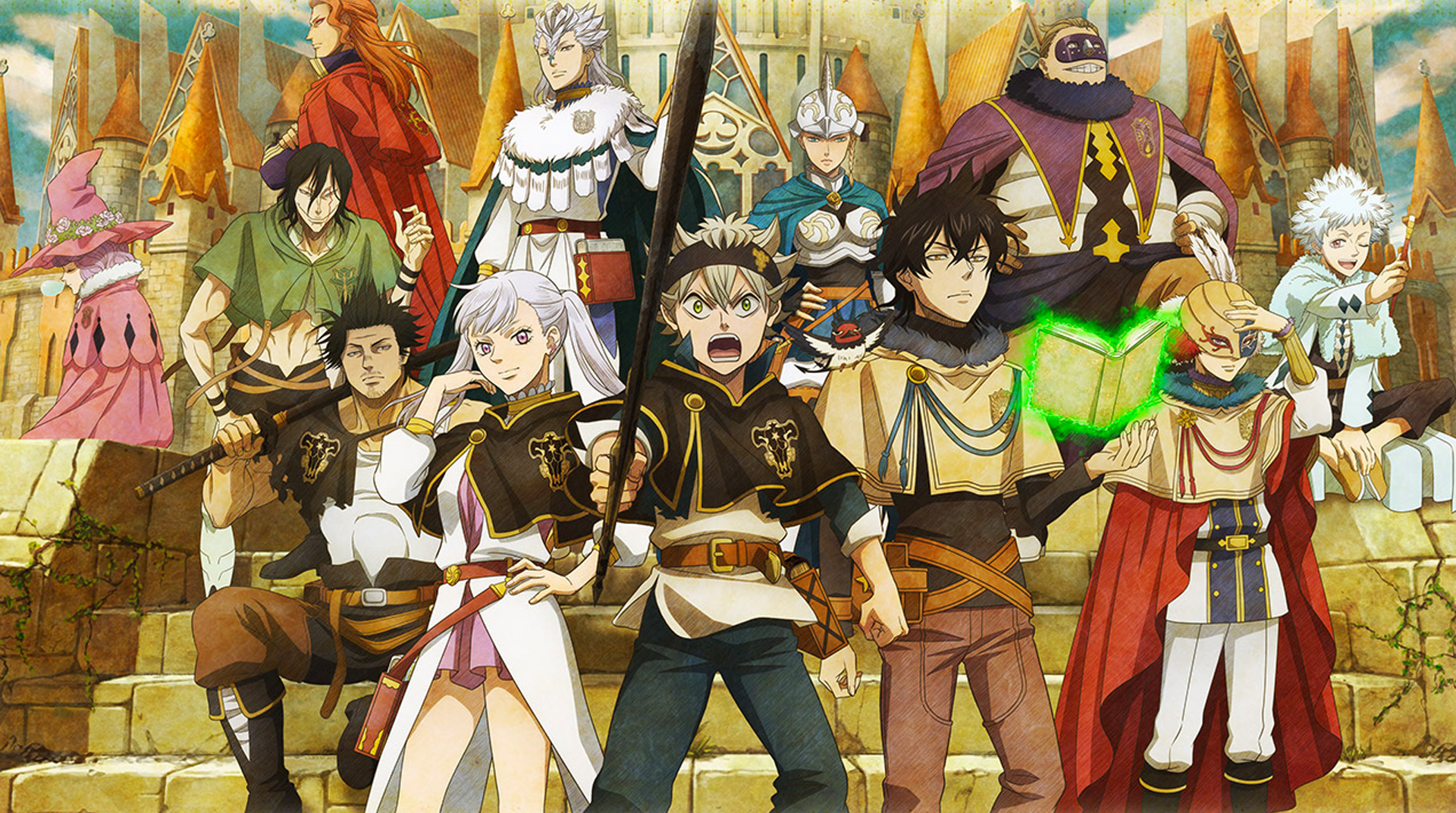 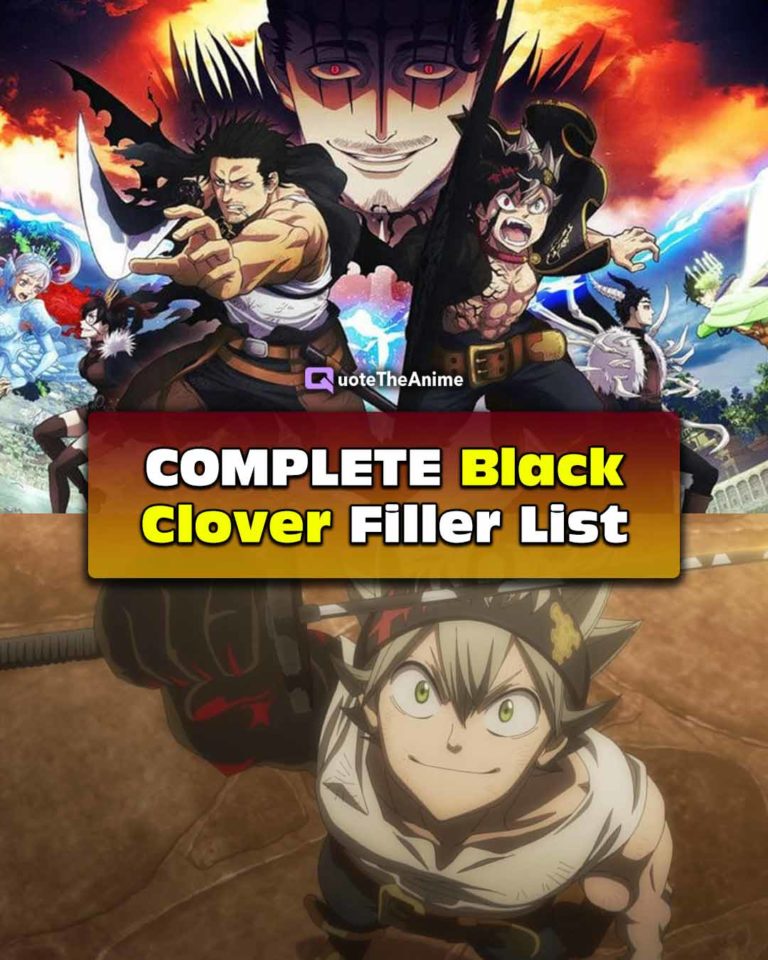 COMPLETE Black Clover Filler List (OFFICIAL) Black Clover is one of the top anime currently. Many will argue that it is a part of the 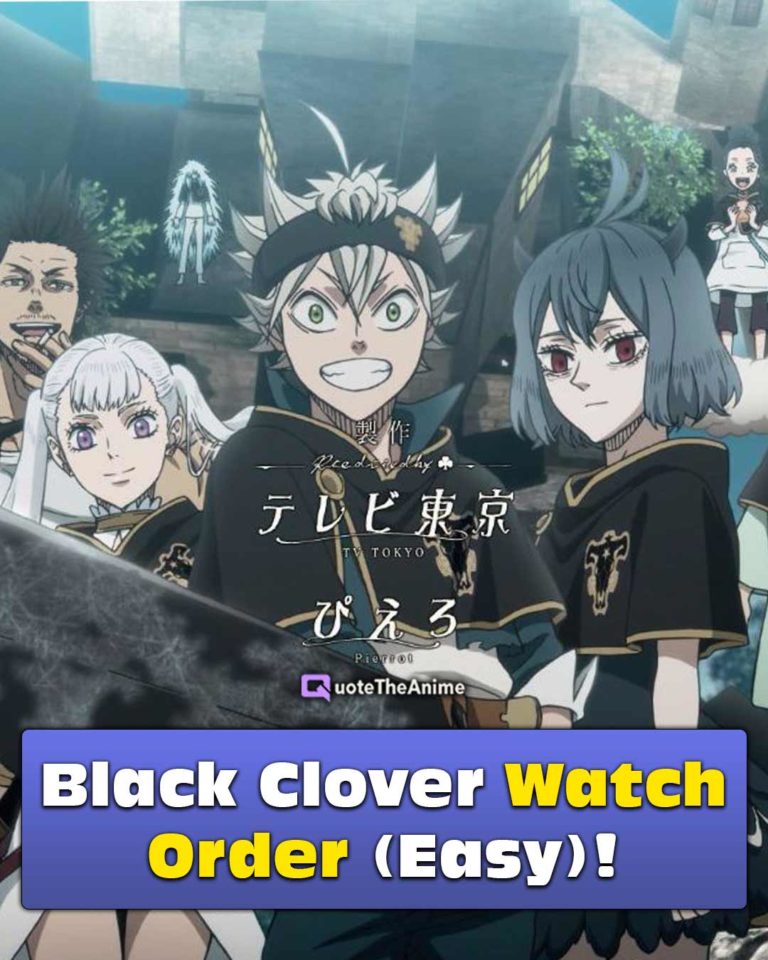 COMPLETE Black Clover Watch Order (Easy to Follow)! What do you think of first, when you hear the title, Black Clover? I personally think of 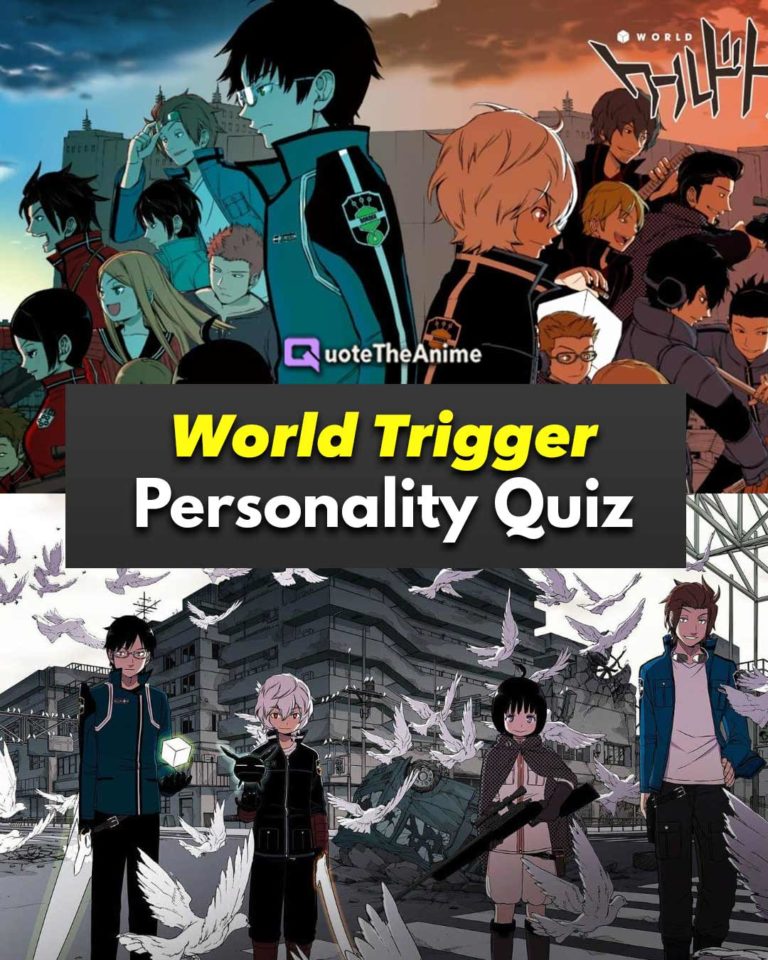 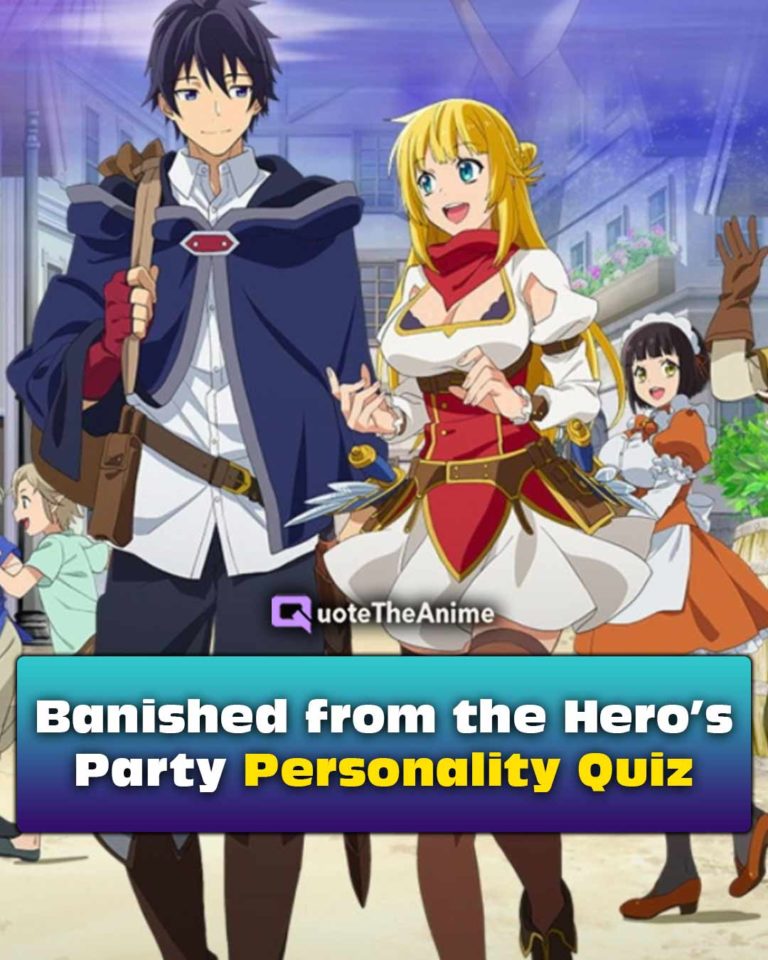 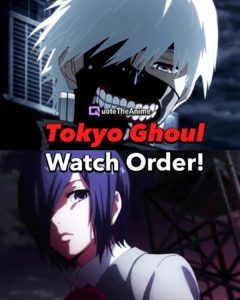